The most unique collaborations in California history: About 50 years ago, 14 million Americans stopped eating grapes — for a very good reason.

Using nonviolent tactics like marches and hunger strikes, grape pickers made their plight a part of the national civil-rights conversation. It took time, but their efforts paid off: In 1970, after five years of the so-called Delano grape strike, farmworkers won a contract promising better pay and benefits.

A few years later, their efforts led to the passage of the California Agricultural Labor Relations Act of 1975, which established collective-bargaining power for farmworkers statewide.

But while Chavez has been honored with a national monument, a postage stamp and three state holidays, he wasn’t the only catalyst for change. Or even the leading one. Rather, it was Larry Itliong, a Filipino-American organizer, who led a group of Filipino-American grape workers to first strike in September 1965. 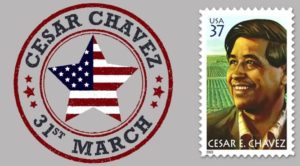 “The Filipinos were far more radical” than the Mexican-American farmworkers, says Matt Garcia, a professor of history at Dartmouth College and the author of From the Jaws of Victory: The Triumph and Tragedy of Cesar Chavez and the Farm Worker Movement. “They were focused like a laser, and decided that they were going to force the issue.”

The farmworkers of Central California’s San Joaquin Valley largely hailed from two groups: Mexican-Americans and Filipino-Americans. But while they performed the same jobs in the same fields, they had arrived in California’s agricultural industry via very different routes.

The first big wave of Filipino migration to the U.S. came between the two world wars. According to the book Little Manila is in the Heart by Dawn Mabalon, more than 31,000 Filipinos came to California between 1920 and 1929, many in search of agricultural work. Most came from rural areas of the Philippines, having sold off-farm animals, crops and small parcels of land in order to fund the 7,000-plus-mile journey across the Pacific.

As a group, they were more than 90% male. And because anti-miscegenation laws forbade interracial marriage in California, many Filipino men who settled in the U.S. remained single. Those laws were finally changed in 1948, but at the dawn of the Delano grape strike, many from that wave of Filipino-American immigrants (often called “Manongs,” which translates to “older brothers”) had failed to marry. They were aging into their 50s and 60s, still single and living together in communal farm barracks.

Roger Gadiano, a 72-year-old Filipino American who grew up in Delano in the 1960s, says he was one of the only “pure-breed” Filipino children in the town.

With so many unmarried male laborers geographically untethered to homes and families, Filipino migrant workers were able to cross a broad swath of territory every year, bouncing season to season from Alaskan salmon canneries to Washington apple orchards to the grape harvests of California.

Their constant movement, Garcia says, gave Filipinos the chance to see their labor in different settings, and to witness the power of organized labor more than their comparably less-mobile Mexican counterparts. “They saw the possibility of extracting themselves from the oppression of the workplace,” says Garcia. “They saw different paths.” By contrast, Garcia says, the more rooted Mexican-American farmworkers were “beaten down and fighting against structures of oppression that they were born into.”

And because the Filipino population was aging, they were also less patient—they needed raises, retirement benefits, and healthcare immediately. “When there was a strike, the Manongs willingly went along,” says Gadiano. “When you live in a room for 20 years or so and don’t see much of a future, a little bit of a raise and some benefits would help… The mentality of the Manongs is: Anything is better than what we have now.”

And they possessed a visionary leader in Larry Itliong. In the 1930s and 40s, he’d helped organize a cannery workers’ union in Alaska, had led lettuce strikes in Salinas, California and organized asparagus strikes in Stockton. In September 1965, he sparked the movement in the vineyards of Delano.

Why did the Delano grape strike happen?

According to Garcia, the Delano strike was inspired by the success of a similar Filipino-American farmworker strike—on May 1965, in the Coachella Valley. There, an Itliong-led group of Filipino-American migrant workers asked for a $0.15/hour raise. The strike lasted a week. The growers met the terms of the demand. “That was the first blush of success,” Garcia says.

Only three months later, many of the same Filipino-American farm workers went to Delano, California for the autumn grape harvest. Encouraged by their success in Coachella, they struck again. But according to Gadiano, once the Delano grape strike was underway, the situation at the camps turned grim. “It was a gloomy situation,” he says. “Some of the camps were closing down. They [the growers] were beating them real bad, shutting off the water.”

Both sides threatened violence. Gadiano says that when a cousin tried to cross the picket line and work in the fields, striking laborers would throw rocks at him. “It was really ugly,” Gadiano says.

What did workers gain as a result of the strike and boycott?

The Delano grape strike ultimately succeeded. After five long years, the growers signed a contract that made significant concessions to the farmworkers, including a pay raise, health-care benefits, and safety protections from pesticides. But many of the benefits disproportionately benefited Mexican-American laborers. Hiring halls—set up as a result of collective bargaining—disproportionately favored permanent residents (i.e. Mexicans) over seasonal workers (i.e. Filipinos).

Fed up with the direction of the union, Itliong resigned from the UFW in 1971. “In the end, Larry probably should’ve been president” of the union, says Garcia.

“There’s a pain,” says Gadiano. “Cesar is revered. And the sad part is Larry Itliong and the Manongs’ role has been diminished to a footnote in history. But we started a movement that was incredibly positive. It helped farmworkers not only in California but around the United States. And people forget.”