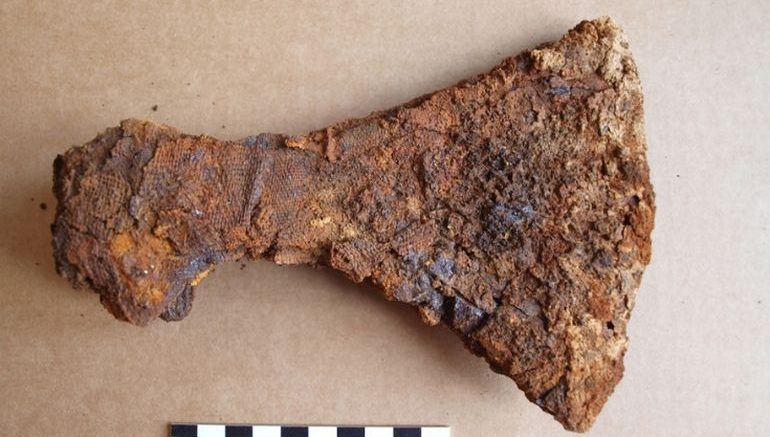 An incredible burial scope was discovered at Hårup in southwest Denmark, and it was later identified as an intact dødehus (or ‘death house’) that contained the remains of a Danish couple and another man (in an additional compartment).

The tomb ‘house’ in question measured over 546 sq ft, with its graves dating back to around 950 AD.

And in addition to obvious (yet scant) human remains, archaeologists have also Discovered some medieval artifacts, including what is considered as one of the largest axes (also known as Dane ax) from the Viking Age – and it has lain beside the man in the main tomb.

Interestingly enough, the male member of this buried couple was only accompanied by his great ax. This suggests how the man presumably identified himself as a warrior during his lifetime.

Furthermore, on closer analysis, the researchers discovered out that this large ax specimen was neither ostentatiously decorated nor inscribed, thus hinting at how the ‘practical’ weapon was not just some burial gimmick for ‘false’ glorification of the deceased.

Other than this imposing Dane ax, the analysts also located another (slightly smaller) ax specimen from the wooden burial box of the second man.

The experts have put forth their Theory regarding how this male was probably related to the main occupant of the dødehus and was thus a member of the local warrior clan.

In any case, there is very little doubt about the elite status of the buried couple. To that end, the archaeologists had observed how the female member (of the couple) was laid down in a wooden wagon – a then-contemporary practice reserved for women of noble birth.

Furthermore, the woman was found to be accompanied by a pair of keys that symbolized her control over the home and the domestic ambit, while the remnants of her dress were found to have woven threads of gold and silver.

Quite intriguingly, the woman’s wagon also contained an embellished ceramic cup that was probably Baltic in origin.

Moreover, another nearby tomb uncovered a female occupant being accompanied by two silver ‘dirhams‘ – coins of Islamic origin (that were possibly forged in medieval Afghanistan).

These exotic artifacts allude to how the Vikings maintained comprehensive trade routes that connected the significant regions of Europe, Asia and even North Africa.

Suffice it to say, the scientists are looking forth to solve even more puzzles when it comes to the archaeological scope at Hårup.

In that regard, future projects are expected to focus on the extant items found inside the dødehus, including the woven cloths and a single strand of black hair found in the woman’s rich clothing.

The latter find might pave the way for further DNA examination that could aid in revealing the identity of the noble Viking lady in question.