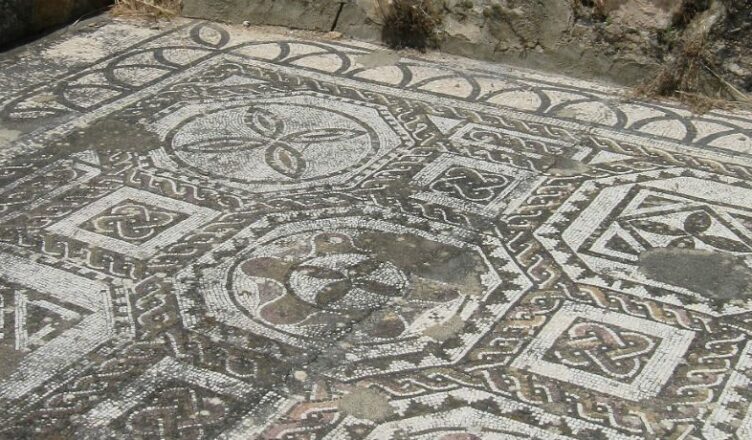 An enormous Roman villa has been found beneath a field in Oxfordshire packed with trophies, including coins and boar tusks alongside a sarcophagus containing the skeletal remains of an unnamed woman.

Amateur detectorist and historian Keith Westcott discovered the ancient remains beneath a crop in a field near Broughton Castle near Banbury. A team of archaeologists excavated the remains of the historic building, which is bigger than the mausoleum at the Taj Mahal, as part of a 4-month excavation project.

The land previously belonged to Lord and Lady Saye and Sele, the parent of Martin Fiennes, who now owns the land. He works as a principal at Oxford Sciences Innovation and is 2nd cousin of British explorer Ranulph Fiennes and third cousin of actors Ralph and Joseph Fiennes.

The new structure is believed to be the 2nd largest Roman villa ever found in Britain, behind only the Fishbourne Palace in West Sussex, which dates back to 75 AD was discovered in 1960.

Mr. Westcott, 55, decided to investigate the sites after being told by local farmer John Taylor that he had plowed his tractor into a large stone in 1963. Mr. Taylor said he saw a hole had been made in the stone and when he reached inside he pulled out a human bone.

Incredibly, the farmer had uncovered a sarcophagus of a high-status woman who had died in the 3rd or 4th century. Fascinated by the story, Mr. Westcott set off in October 2016 to explore the site properly.

His eureka moment came when he discovered a 1,800-year-old tile from a hypocaust system, which was an early form of central heating used in high-status Roman buildings.

It was then he knew that whatever ruins lay beneath the soil were of ‘unimaginable quality and significance.’ Along with a team from Oxford Archaeology, Mr. Westcott spent 2 weeks on the field in April this year, digging 5 trial trenches to gauge the scope of the remains.

Using technology such as magnetometry – which acts as an x-ray through soil – walls, room outlines, ditches, and other infrastructures was uncovered. The villa accommodation would have included a bath-house with a domed roof, mosaics, a grand dining room, kitchens, and a living accommodation.

In total 178 items of significance were uncovered, cleaned and cataloged including coins bearing the mythological twins Romulus and Remus as well as bone china. Mr. Westcott, who is the director of The Association of Detectorists, said: ‘It is truly is a remarkable find of incredible historical significance.

‘We have only uncovered about one percent so the possibilities of what we still might find are endless. ‘The only bigger one is at Fishbourne Palace in West Sussex – but that is a palace and we think that parts of it could date back to the 2nd century.

‘All other sites of this significance – with the exception of North Leigh near Witney – have a visitor center and/or a museum, so it really is a big deal.’ He says that it is possible Roman dignitaries visited for sporting purposes.

‘Most of the other big courtyard villa’s were found in the 1800s and excavated using Victorian techniques’, said Mr. Westcott. ‘All of the other discoveries had been done so by accident but in this instance, I had a theory and went with it.

‘The more we are finding out about this part of north Oxfordshire, we’re realizing at the head of the triangle between Fosse Way, Akeman Street, and Watling Street was a very important Roman area’, he said.

Unlike many other sites, this one has nothing built on top. Universities, English Heritage, the Heritage Lottery Fund and Roman archaeology are now being approached to take part in a full excavation. The cost of the project could be in the region of around 2 million pounds.

Martin Fiennes, who was also central to the operation and took part in the dig, said: ‘The next step will be for me to reach out to various universities, starting with Oxford, to see if they are interested in leading a project to do a full excavation over a period of years.

‘Obviously we would like someone to do it who can involve the local community as much as possible as well as comprehensively recording the sites.

‘If no one wants to do it, then it stays happily undisturbed for another 50 or 100 years until someone comes up with the money and interest.’