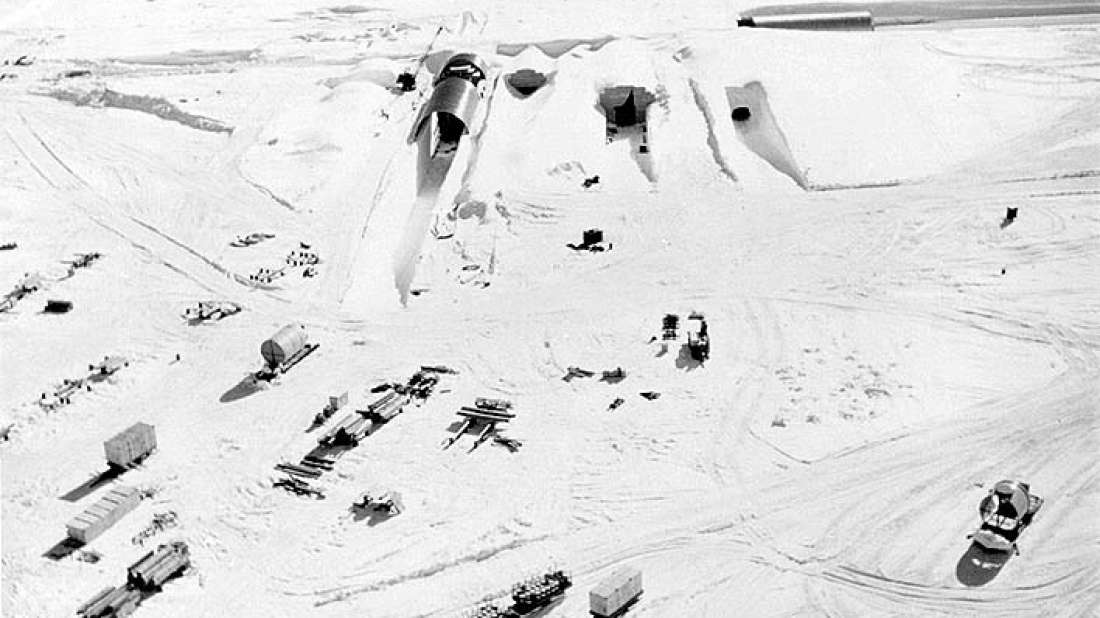 In the late 1950s, at the height of the Cold War, the base was built for “research.”

The ultimate objective of placing medium-range missiles under the ice – close enough to strike targets within the Soviet Union – was kept a secret from the Danish government.

It was occupied from 1959 to 1966 under the auspices of the Army Polar Research and Development Center.

Its climatically hostile environment was located a mere 800 miles from the North Pole. The site was chosen on May 17, 1959.

At 6180 feet above sea level, this flat plateau features a mean temperature of minus ten degrees Fahrenheit, recorded temperatures of minus 70 degrees and winds exceeding 125mph.  The average annual snow accumulation is four feet.

The machine’s two operators could move up to 1200 cubic yards of snow per hour. The longest of the twenty-one trenches was known as “Main Street.”

It was over 1100 feet long and 26 feet wide and 28 feet high. The trenches were covered with arched corrugated steel roofs which were then buried with snow.

These tunnels contained numerous prefabricated buildings that were up to 76-feet long.

The base was powered by a portable PM-2A nuclear reactor that produced two megawatts of power for the facility.

Most of the supplies came via Thule Air Base, over one hundred and fifty miles to the west. Thule Airbase is the US Air Force’s northernmost base.

The freshwater supply was produced by pumping steam deep down into an ice well.

This “Rodriguez Well” produced over 10,000 gallons of freshwater daily.  This water supply had fallen on Greenland as snow nearly two thousand years before.

Within three years after it was excavated, ice core samples taken by geologists working at Camp Century demonstrated that the glacier was moving much faster than anticipated and would destroy the tunnels and planned launch stations in about two years.

The facility was evacuated in 1965, and the nuclear generator removed. Project Iceworm was canceled, and Camp Century was closed in 1966.