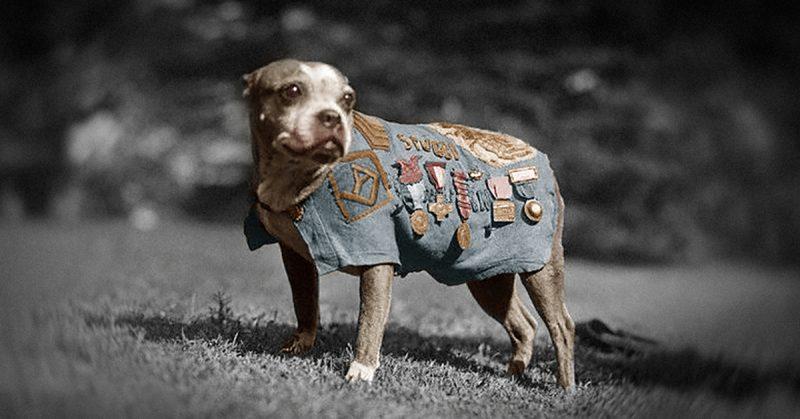 The First Dog in American History to be Awarded Military Rank

Sergeant Stubby was a World War I hero. He led a very successful military career and was the first dog to be granted military rank in the history of the U.S. Army.

He was awarded multiple decorations for his heroism and bravery, and not just by the US — he also received a medal from France.

As well as his military service, Stubby also met three sitting presidents, attended numerous veterans commemorations, and was involved in community organizations.  He was known by millions of Americans and stayed a celebrity until his death in 1926.

Stubby’s story begins in 1917, when a young private, J. Robert Conroy found a brindle puppy with a short tail at Camp Yale where his unit was undergoing basic training, according to the Smithsonian.

Conroy named the puppy Stubby, and the pup was soon the unofficial mascot of Conroy’s unit, the 102nd Infantry, 26th Yankee Division.

Stubby was soon training with the soldiers, learning drills and bugle calls, and even a doggy version of a salute. Because Stubby had a good effect on the soldiers’ morale, he was allowed to stay, even though dogs were forbidden in the camp.

He was soon discovered by Conroy’s commanding officer, but the CO let him stay after being charmed by the saluting dog. When the soldiers headed for the front lines, Stubby accompanied them, and soon became used to the noise and chaos of gunfire and artillery.

Stubby’s first war injury was from gas exposure. While he was taken to a field hospital and eventually recovered, that early exposure left him very sensitive to even the smallest amounts of gas in the air. When his division was the subject of an early morning gas attack, Stubby tore through the trench, waking sleeping soldiers to sound the gas alarm and preventing many men from being injured.

Stubby would also help find wounded men who were between the trenches. He would listen for the sound of English being spoken and follow that to the wounded soldiers, barking for the paramedics, or if the wounded were mobile, he would lead them back to camp.

According to the Connecticut Military Department, Stubby himself was injured again in April 1918, when the 102nd was part of a raid on a German-held town. As the Germans were withdrawing, they were also lobbing hand grenades at the pursuing American forces and Stubby was wounded on a foreleg when one of the grenades went off. After that, the women of the town made him a blanket, embroidered with the flags of all the allies, to show their gratitude. The blanket also held his various stripes and awards.

Once he even found and captured a German spy. The spy was attempting to map the American trenches when Stubby spotted him.

The German tried to soothe the dog, but Stubby attacked the spy and bit his legs, causing him to fall over. He continued his attacks until his own soldiers could arrive. That capture is what earned him his promotion to the rank of sergeant, given by the commander of the 102nd.

In addition to all his other awards, in 1921 he also received a gold medal from the Humane Society, which was presented to him by General John Pershing, who was the Commander General of the United States Army.J. Robert Conroy, Stubby’s owner, eventually went on to study law at Georgetown University and again, Stubby went, too. He was made the mascot of the Georgetown Hoyas and remained so until his death.