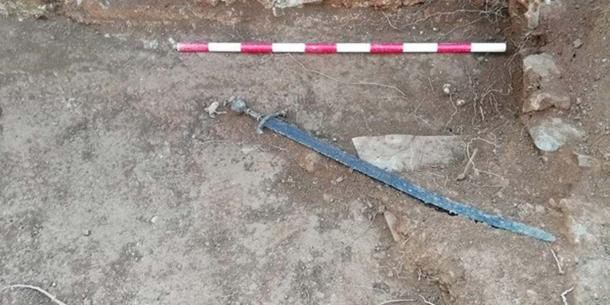 Medieval Sword from the War of the Two Peters Unearthed In Spanish Castle:

Archaeologist have made a rare discovery during their 2nd season of work at a Medieval castle in Aín, Castellón, Spain. The have excavated a 700-year-old sword that is in a remarkable state.

The style suggests it dates to the time of a significant Spanish historical event – the War of the 2 Peters.

According to DiariodeAvisos, even the archaeological team was surprised by the discovery and they have said a discovery of this type of artifact in such a beautiful state of preservation is “extremely unusual.”

The sword measures 94cm (37 inches) long, has a guard 13 cm (5.12 inches) wide, and a spherical pommel. There are 2 bronze rivets on the hilt and a groove down the center of the blade.

The local population has also taken an interest in the well crafted sword and Las Provincias reports they have even given the artifact a nickname – ‘Espadana’ (which may be translated as ‘noble sword.’)

The sword was discovered amongst the ruins of Benalí Castle. The castle has Muslim origin and was one of the most important locations during the Moorish rebellion in the area in the 16 th century.

The most interesting aspects of the site today are a tower and scattered walled enclosures.

Mediterráneo report archaeologist discovered the sword under a mortar floor in a large room with a hearth and a work bench.

They made the discovery while they were working on their 2nd phase of a project aimed at strengthening the southwest sector of the castle wall.

This is meant to stop the deterioration of the monument and guarante its stability, with the hopes of making the castle a first rate historic site.

The archaeological context and style of the sword both suggest that it was created during the 14th century and can thank its well-preserved state on damage to the castle during the War of the Two Peters (1356-1367).

The War of the 2 Peters was a series of battles between King Peter of Castile (Peter ‘the Cruel’ or ‘the Just’ depending on your preference) and King Peter IV of Aragon (Peter ‘the Ceremonious’).

Historian say the 2 men were almost evenly matched and the war ended with no clear winner. It mainly consisted of a series of border skirmishes in which land quickly changed hands.

The French and the English also played supporting role in this war – French commander Bertrand du Guesclin supported Henry of Trastámara, who was linked with Peter IV of Aragon, and Peter of Castile had English backing (which has led some to count the War of 2 Peters as an extension of the Hundred Years’ War too).

The Black Death , drought, and a plague of locusts all added to the hardships of this war.