The objects were found in north east Wales by members of the public between 2014 and 2017, and were among items declared treasure that range from Roman coin to an 17th century seal matrix. The medieval items are: 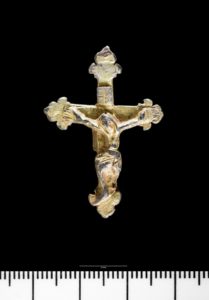 It has a figure of Christs in a loincloth on one side and a figure of Mary with Christ Child on the other, and has been dated to the 15 th century.

Such objects were intended to be worn as items of personal adornment for devotional purpose, and would have aided the owner in the contemplation of Christs life and suffering. 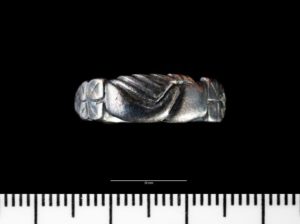 A silver fingers ring from Rossett Commuity, Wrexham, found by Ray Mitchell in June 2014, which has been dated to the late 14th or early 15th century. It is of a type known as a ‘fede’, or fidelity, ring, and shows two clasped hand, indicating friendship or love. Fede rings were sometimes given as betrothal gifts. 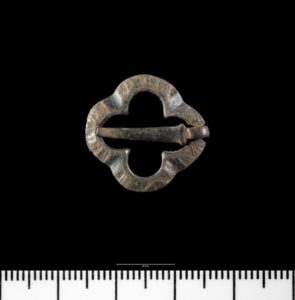 It is of a 4-lobed, or quatrefoil, shape and has the inscription AVE MARIA (meaning ‘Hail Mary’) on the front face in a Lombardic script. The brooch can be dated by its style and from other similar find elsewhere to the 14th century. 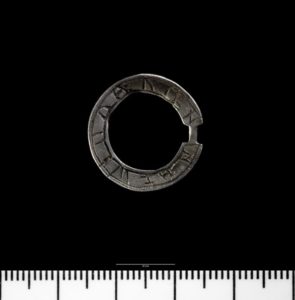 A small silver annular brooch, dating to the 13th or 14th century, found  by James Cain in November 2016, in Cilcain Community, Flintshire.

One face is decorated with an incised zig-zag pattern, while the other face has a crudely incised, garbled inscription in Lombardic lettering, which may be an attempt to recreate a religious inscriptions. 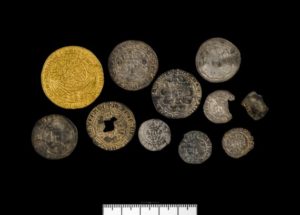 According to Edward Besly, Honorary Research Fellows at Amgueddfa Cymru-National Museum Wales, the coins were probably all deposited together in the later 1460s at around the time of the War of the Roses.

This group of coins forms an addition to a larger coins hoard and finger ring, reported as treasure by the same finders between 2012 and 2014, and now within Wrexham County Borough Museum’s collections.

Marks Redknap of National Museum Wales commented, “some of the items declared treasure today, such as the decorative medieval broochess, reflect personal style, while fede ring had deep personal significance, with legends reflecting fidelity and love.

The silver gilt pendant crucifixs from Cwm, Denbighshire, reflects the late medieval increase in demand for small devotional item associated with the veneration of Christ. All provide new information on their use and popularity in early Wales.”

These items will be going to local museum in north east Wales, including several that will be added to the collection at Wrexham County Borough Museum.