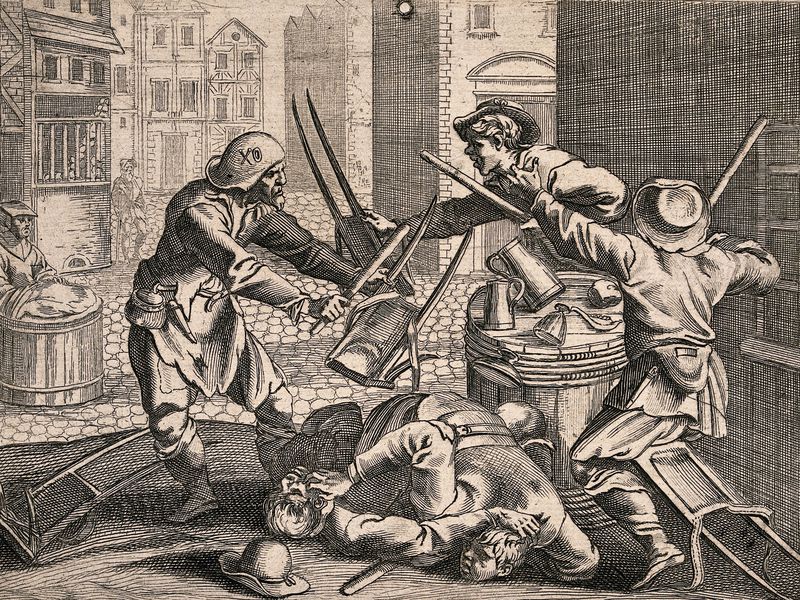 Looking at nearly 400 skulls dating from 1050 to 1550 C.E. found in six cemeteries, archaeologist Kathryn Krakowka found that nearly 7 percent of them showed signs of violent trauma, reports Learn. Krakowski’s research was published earlier this month in the American Journal of Physical Anthropology.

Medieval times could be truly rough times for any man – especially a poor one – as a new study shows. The study identified the patterns and prevalence of violence-related skull trauma among a large sample of skeletons from medieval London.

“It appears that violence in medieval London may have been largely tied to sex and social status,” archaeologist Kathryn Krakowka from the University of Oxford tells New Scientist, having reached that conclusion after examining 399 skulls from six different sites from across medieval London (1050-1550).

The skulls were analyzed for evidence of trauma and assessed for the likelihood that it was caused by violence. Kathryn Krakowka and her team collected the skulls from two types of cemeteries; monastic and free parish. The monastic cemeteries were usually reserved for the upper class while the free parish was used by the lower socioeconomic classes.

Unsurprisingly, males from the free parish cemeteries appear to have been the demographic most affected by violence-related skull injuries, particularly blunt force trauma to the cranial vault.

Specifically, Krakowka found that 6.8 percent of all skulls examined showed some kind of violence-related trauma, while it was mostly males from 26 to 35 years old that were affected. Additionally, nearly 25 percent of the skull injuries took place near the time of death, indicating that people died from blows to their heads.

Furthermore, Krakowka noticed that the London cemeteries she explored had a violence rate almost double than elsewhere else in England. Despite the results showing violence was more prevalent in medieval London than in any other part of medieval England, it appears to be quite similar to other parts of medieval Europe.

“High levels of violence are evident in cemeteries from other parts of medieval Europe such as Croatia,” Krakowka told New Scientist, as a similar study showed an incredible 20.1 percent of people had cranial fractures in Croatia.

The fact that males from the free parish cemeteries were disproportionately affected by violence-related trauma, especially blunt force trauma, makes Krakowka speculate that this could be the result of an informal conflict resolution between individuals of lower status, as the newly established medieval legal system wasn’t available to them as they couldn’t afford the fees or didn’t know how to access the services.

On the other hand, she concludes that the upper classes had access to the developing legal system of the time, and this was how they usually avoided a more informal (and violent) way of resolving disputes.

Coroners’ rolls from the time bolster Krakowka’s suggestions as it shows that a way too large amount of homicides took place on Sunday night, when many working-class men would have been drinking at a pub, and on Monday morning.

“This, in combination with my results, possibly suggests that those of lower status resolved conflict through informal fights that may or may not have been fueled by drunkenness,” Krakowka tells New Scientist.

Luke Glowacki, an anthropologist from the Institute for Advanced Study in Toulouse, France, agrees with Krakowski’s conclusions, “People of low status don’t have resort to the rule of law. Unable to hire a barrister to represent them, they resort to violence as a means to resolve conflict,” he tells New Scientist.

To conclude, the researchers also noted that even if individuals from the upper class decided to solve a dispute between them (outside a court), they would have most likely fought under different rules, where swords were in play and armor would be involved in order to protect the heads of the opponents.