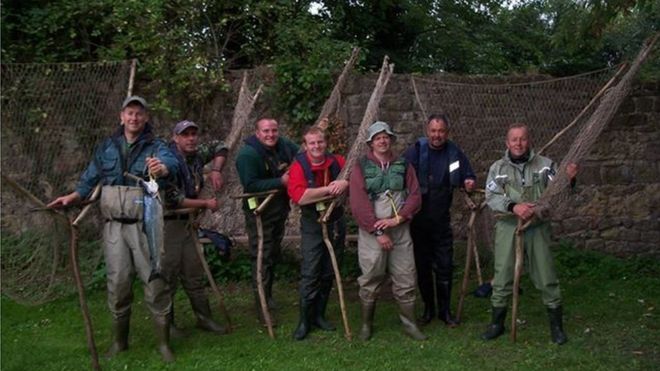 Fishing baskets, thought to date back to the 14-th Century have been discovered by 2 brothers walking on the Severn Estuary (Welsh: Môr Hafren), off the coast of Monmouthshire (Sir Fynwy) in south east Wales.

The baskets were uncovered by recent storms having been buried under silt and clay for 100’s of years.

The 4 baskets were found by Martin and Richard Morgan, members of Black Rock Lave Net Fishermen group. Lave Net Fishing is a traditional method of fishing practised for thousands of years.

The Lave Net Fishermen at Black Rock who all come from the local villages of Portskewett (Porthsgiwedand), Caldicot (Cil-y-coed) and Sudbrook are the last Lave Net fishermen in Wales.

The tradition of Lave Net fishing at Black Rock has been passed down through the generations. Other ancient items have been discovered by the fishermen of the estuary over the years, including prehistoric animal bones and wooden ship wrecks.

Similar baskets found by the group about 7 years ago were recorded by Cadw, the historic environment service of the Welsh Government and carbon dated to being from the 12th-14th-Century.

The area is one steeped in history. Portskewett is mentioned in ancient Welsh stories as one of the 3 chief ports of Wales.

At the eastern edge of the village there is evidence of a significant neolithic chambered tomb or long barrow.

A small group of standing stones mark the entrance of the site known as Heston Brake. The estuary has played a significant part in the life of those that have dwelt in the area for 1000’s of years.

The area of Caldicott saw considerable activity at the time of the Bronze Age. Close to the Nedern Brook beside Caldicot Castle (Castell Cil-y-coed) excavation’s uncovered a plank from an ancient boat and complex wooden structures in the former river bed.

Sudbrook was seen to be of early historic importance in guarding the Severn estuary at an ancient ferry crossing place.

Sudbrook hillfort is also located on the coast, and is thought to have been built and occupied by the Silures from the second century BC. The Silures were a powerful Celtic tribe of people that lived in what is now south-east Wales.