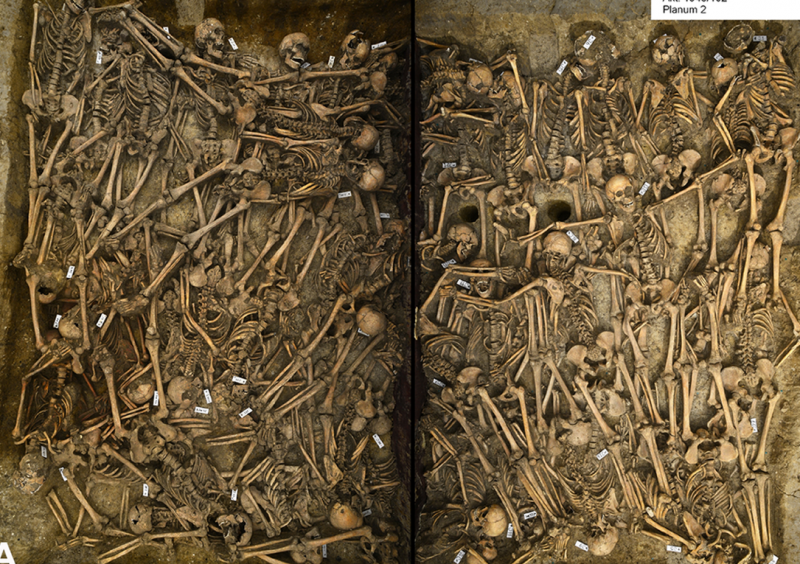 In November of 1632, the towns people of Lützen, Germany, were stuck with a grim task: They had to bury some 9000 soldiers who were left dead on a battlefield after a bloody fight during the 30 Years’ War.

Archaeologists recently undid some of that work.

A few years back, researcher uncovered a mass grave at the site of the Battle of Lützen.By analyzing the bones, they have now learned more about the violent lives and death of soldiers from this era.

The 30  Years’ War was one of the bloodiest events in European history — deadlier than the Black Death and World War II, in term of the proportion of the population lost. Fought between 1618 and 1648, the conflict started out as a struggle between Catholics and Protestants within the Holy Romans Empire.

The brutal clashes touched much of central Europe, but most of the battle’s were fought in what is Germany today.

Outside of the killing on the battlefields, famine and disease outbreaks devastated population’s. Both sides in the conflict heavily relied on wealth seeking foreign mercenaries (whose loyalties might change based on who was paying more), and occupying armies terrorized civilian in cities and villages.

One turning point in the war came when Sweden intervened in 1630, lending support to Protestant forces.

Swedish King Gustav II Adolf led a series of victorious battle, until he was killed in a fight against General Albrecht von Wallenstein, commander of the Holy Roman Empire imperial troops, during the Battle of Lützen, just southwest of Leipzig, on Nov. 16, 1632.

Archaeologist located the site of the Battle of Lützen in 2006 after a metal detector survey turned up about 3,000 projectiles, ammunitions and other object from the fight.

A trench excavated in 2011 then revealed a mass grave. To prevent the burial site’s from being looted by treasure hunters and eroded by bad weather, the scientists did not excavate the skeletons on the site. Instead, they lifted the remains out of the ground in a 55 ton block of soil, split into two.

Led by Nicole Nicklisch, of the State Office for Heritage Management and Archaeology Saxony Anhalt, a team of bio-archaeologists analyzed the 47 skeleton in this block of dirt, looking for the fatal injuries the men sustained during the battles.

According to their results, published in the journal PLOS ONE on May 22, most of the men were already in rough shape when they headed into their final battle.

16 had experienced previous head injuries; one man had even suffered four head wounds in previous conflicts before he died. 21 had other healed or healing bone injuries, like fractures in the arms, legs and ribs.

By looking at the unhealed wound, the researchers could see what the men suffered on the battlefield.

Though some men had cut marks and slash wounds on their bones, bladed weapons seemed to play a minor role in the death of these soldiers. Instead, more than half of the men had been hit by gunfire. Twenty one suffered gunshot wounds to the head, and 11 of them had bullets still lodged in their skull.

The high number of gunshots wounds was unusual for the time — at least compared to other mass grave from the Thirty Years War found German sites like Wittstock and Alerheim.

Swords and knives were still “the weapons of choice for hand-to-hand combat,” the researchers wrote.

Historical records suggests that an elite unit (mostly made up of hired German soldiers) of the Swedish army called the Blue Brigade suffered a deadly defeat in the area where the grave was found, after they were attacked by surprise by a cavalry unit from the Catholic imperial army, the researchers stated.

Remains of bullets reveal that the soldier had been attacked with pistols, muskets and carbines—weapons that cavalrymen used for short distances.

Historical records mention that soldier would keep bullets in their mouths so they could quickly reload their guns during battle, and 2 of the skeletons in the grave still had unfired lead bullets in their oral cavity.

The researcher speculate that most of the men buried in this grave were fighting for the Swedish army, though it is likely soldiers for the imperial Catholic army ended up in the pit, too.

There was not much clothing or material found with the bodies, suggesting that the soldiers were stripped of their uniforms and whatever else they were carrying before they were buried. And while some bodies seem to have been laid down with care, others appear to have been thrown into the pit, most likely by the towns people who were left to clean up the mess a few days after the battle, after the armies had moved on.

“It can certainly be assumed that the local populations of Lützen did not have a positive attitude towards the fallen soldiers, regardless of any military affiliation,” the researcher wrote. “In the 30 Years’ War, every battle brought destruction and deprivation for the rural population.”