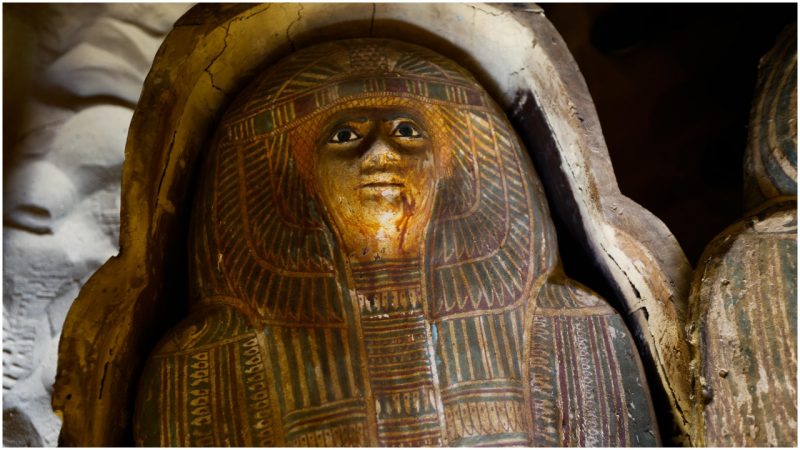 An ancient Egyptian burial ground dating back to around 2500 BC, containing high-ranking officials ‘ tombs, has recently been discovered southeast of the famous Giza Pyramid.

The find includes a 5th Dynasty Limestone tomb from Egypt, which stretched from the 25th to the 24th century BC, said Mostafa Waziri, Supreme Council of Antiquities Secretary-General.

The tomb contained the remains of 2 men, “Behnui-Ka, a priest, judge, and purifier who served the kings Khafre, Userkaf, and Niuserre; and Nwi Who, who served as chief of the great state, the overseer of new settlements, and purifier of Khafre,” according to the Archaeological Institute of America. The name Behnui-Ka has never been seen before on the Gaza plateau.

Among the tomb artifacts is a limestone statue that depicts 1 of the men with his wife and son. The 2 men’s sarcophagi were found intact, which means their remains are probably inside, but no statement has been made about that as yet.

The fact that these 2 officials were heavily involved in the building had a special resonance for the Egyptian officials. Former Minister of Antiquities, Dr. Zahi Hawass, said as part of the statement made of the pyramid builders cemetery that this “shows the world that the pyramids were not built by slaves but that its builders had built their own tombs beside their kings.”

The 5th Dynasty has yielded another important discovery in 2019: In April a tomb was found of senior official south of Cairo. His necropolis contained brightly colored reliefs, including a vivid green.

There are not many texts available to study and understand the 5th Dynasty, with much of the context coming to experts through events recorded on stone monuments.

The 5th Dynasty is often grouped with Dynasties Three through Six, covering the period from 2650 to 2150 BC, which is called the “Old Kingdom”. Pyramids were built during this period, and in fact, it is also called “the Age of the Pyramid Builder”.

Historian Marc van de Mieroop has said that the Old Kingdom “is possibly unparalleled in world history for the amount of construction they undertook.”Most of the 20-odd kings of the period focused on building royal mortuaries for themselves and “they diverted enormous resources from the entire country for this purpose.”

Interestingly, the cemetery discovered near Giza was reused during the Late Period, which is early Seventh century BC. Many more “Late Period wooden painted and decorated anthropoid coffins were discovered on site” as well, said Waziri in a statement. Tomb re-use was common in Egyptian history.

The Giza Pyramid, the last remaining landmark of the Seven Wonders of the Ancient World, holds some mysteries. No one is precisely sure when it was built. And recently a group of scientists claimed that the Great Pyramid can concentrate electromagnetic energy in its deepest chambers.

Experts think the Giza Pyramid took 20 years to build but no one can fully explain the mortar used to build it or the exact technology governing its design.