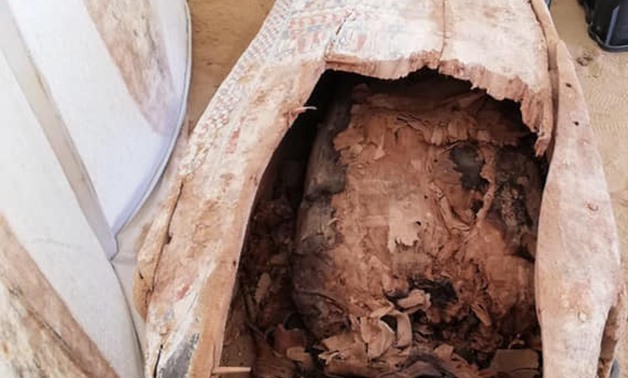 Located to the east of the Prince Waji’s tomb dating back to the Middle Kingdom, Ministry of Antiquities announced on Thursday.

Secretary-General of the Supreme Council of Antiquities Mostafa Waziri said that al-Khalwa, situated at southern Fayoum, contains a cemetery dating back to the Middle Kingdom period, namely Amenemhat III era (1842-1799 BC).

He added that the cemetery has the tomb of Prince Waji, the leader of Fayoum in the Middle Kingdom, and also the tomb of his mother “Nabat Mout”, which lies to the east of it.

In which the mission found the upper part of a statue (40 cm height) made from sandstone of a person holding his hand on his chest alongside with the middle part of a basalt statue (30 cm height).

The mission also discovered inside the 3 burial chambers a number of pottery vessels and 3 heads of Canopian vessels, but some of them were broken into pieces.

Ashmawy pointed out that these chambers were probably to have been looted in the ancient history and reused for burial in later eras.

In this regard, Hani Abul Azm, the head of the Central Administration for Antiquities of upper Egypt.

Remarked that Waji’s tomb was carved in rock and was found by the Italian mission of the University of Pisa in 1981 through the archaeological survey project in the area.

He added that the mission found inside the tomb a limestone statue, on which the name of the prince was written, a piece of a wooden coffin and a pottery vessel.

He included that the statue is currently kept inside the museum store of Kom Oshim, Fayoum.

“The roof of the tomb was completely collapsed, maybe due to a massive earthquake in the ancient history or the weight of the roof stones,” said Sayed Al Shoura, General Director of Antiquities Sector.

He stated that the Italian mission has built a new ceiling to protect the tomb’s inscriptions under the supervision of the Supreme Council of Antiquities.