The public views focused on the spread of coronavirus. Some of the most important archeological discoveries of the period has gone unnoticed in West London. 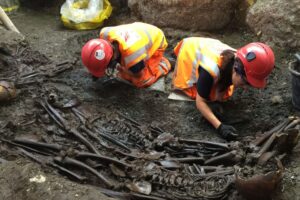 The remains of the legendary King Arthur
are found under the Brent Cross Shopping Centre.

The burial site was discovered last Tuesday (March 14) by an unsuspecting plumber who was doing some preliminary work on one of the first new Wimpys built in decades in the United Kingdom.

Mike Yewbend, the plumber, called the British Museum which sent experts to examine the remains.

Using a combination of carbon dating and guesswork, they determined that this was probably the final resting place of England’s most famous King.

Mr Yewbend told MyLondon: “I didn’t recognise him as King Arthur at first but when the experts told me who they thought it was, it all made perfect sense.

“There’s a local legend that he’s buried here because his men couldn’t be bothered to carry him all the way to Winchester.”

Further investigation revealed gold weapons and armour nearby the body as well as the remains of two goats.

The experts believe this supports the thesis the body is of King Arthur, who according to legend, took the goat as his personal sigil after almost being killed by one.

A legal battle is now underway to figure out what to do with the remains.

The British Museum wish to preserve it for further study whereas Brent Cross management want to put the whole thing in a perspex box as an on-site attraction.

A spokesperson for Wimpys said: “It’s amazing that Wimpy could be a part of this great saga. To honour the momentous occasion, when the Brent Cross store finally opens we’re going to name the largest meal deal after Excalibur.”