Archeologist made another shocking finding about the mysterious Dead Sea Scrolls, stating that there is intrigue around the biblical artifact’s origin.

Over 60 years ago, a shepherd found seven scrolls in the Qumran Caves in West Bank Judaean desert near the Dead Sea. The results produced a larger manuscript, including the oldest surviving copy of the Ten Commandments, known as the Dead Sea Scrolls from the third century BC.

The papers contain biblical and non-biblical stories, offering scientists and historians a glimpse of the past and shed new light on Abrahamic religions like Christianity and Judaism. Fragments of scrolls are scattered across different institutions worldwide, with researchers trying to unravel the mystery.

Although they have been preserved for almost 2,000 years,researchers are still unsure who the original authors were.  While the scrolls were always assumed to be written in the Judean desert, new research suggests this was not the case. 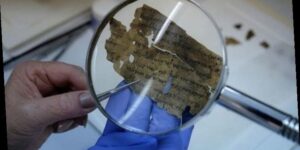 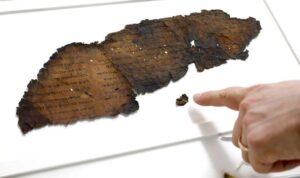 Pnina Shor, who heads the Israel Antiquities Authority (IAA) project, told AFP: “We have discovered through analysing parchment fragments that some texts were written on the skin of cows and sheep, whereas before we thought they had all been written on goatskin.

“This proves that the manuscripts do not come from the desert where they were found.”

Since the fragments were first discovered in 1947, experts have been trying to piece them all together.More than 60 years on, experts are still unsure how to connect them all.

Oded Rechavi, a professor who led the Tel Aviv University team, said: “It’s like piecing together parts of a puzzle. 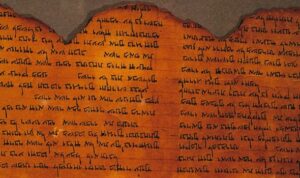 “There are many scrolls fragments that we don’t know how to connect, and if we connect wrong pieces together it can change dramatically the interpretation of any scroll.”

Recently, scientists from the University of Manchester discovered what was thought to be blank pieces of fragments actually contain hidden texts.

The fragments were analysed by using a technique known as multi-spectral imaging, where something is analysed using the electro-magnetic spectrum to discover what would be invisible to the naked eye.

A total of 51 fragments were analysed, and one fragment contained at least four lines of text which are yet to be fully translated, but one of the words is Shabbat (Sabbath).

Another contained the Hebrew letter for L, with researchers desperate to uncover more before the full findings are released.

University of Manchester historian and archaeologist Joan Taylor said: “Looking at one of the fragments with a magnifying glass, I thought I saw a small, faded letter – a lamed, the Hebrew letter L.

“Frankly, since all these fragments were supposed to be blank and had even been cut into for leather studies, I also thought I might be imagining things.

“But then it seemed maybe other fragments could have very faded letters too. With new techniques for revealing ancient texts now available, I felt we had to know if these letters could be exposed.

“There are only a few on each fragment, but they are like missing pieces of a jigsaw puzzle you find under a sofa.”