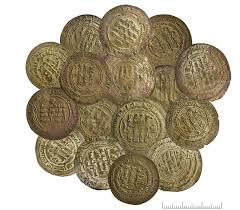 A large Viking treasure has been found in a 3,000-year-old grave in Sweden. The treasure was hidden sometime at the end of the Viking Age and consists of 163 silver coins with Arabic inscriptions.

It is the largest Viking treasure ever found in Uppland, a county on the eastern coast of Sweden.

Swedish archaeologist’s are currently conducting excavation’s in Molnby in Vallentuna as preparation for the construction of a new railroad and they were lucky to uncover an ancient 3000-year-old grave in the area.

When they removed soil and opened the grave, they found a precious Viking treasure.

Someone decided to hide the treasure inside the grave about 1,000 years back, but why is not entirely clear.

“Why Viking Age people hid their treasure is unknown,” archaeologist Asa Berger said. It is possible many Vikings treasures were hidden due to wars or troubled times in the region. Later, these places were forgotten and no one knew anything about the treasures.

In this case, however, there might be another reason why the ancient silver coins were buried under soil.

“There are no indications that war was the reason why the coins were deliberately hidden,” project leader Anna Hed said. In the Icelandic Sagas, there are many stories that tell how people buried valuable objects with the hope they could use them in the after life.

Maybe that is what happened here. Maybe the person treated the coins as a kind of retirement insurance plan, Hed added.

The ancient coins are from Samarkand, a city in modern day Uzbekistan and one of the oldest inhabited cities in Central Asia.

Discover in the 7th century B.C. the historic town of Samarkand served as a crossroad and melting pot of the worlds cultures.

Examinations shows that several of the 163 silver coins are from Samarkand and bear Arabic inscriptions. Other coin’s were produced in areas around Volga, modern Russian and are imitations of the Arabic coins. The youngest of the coins was produced either in 935 A.D. or 936 A.D. It was hidden about 20 years later.

People often sacrificed food and beverage in old barrows, so that their buried ancestor’s could be comfortable in their next life. There are also ancient Norse myths and legend of how it was believed dragon guarded treasure hidden in graves and stone cairns.

It is not the 1st time scientists have found evidence of close contacts between Viking Age Scandinavians and the Islamic world.

Inspection with a scanning electron microscope of the Birka Ring that was unearthed in the late 1800’s revealed the object includes an inset of colored glass engraved with ancient Arabic script.

There are still many ancient Vikings treasures buried in various countries. It is just a matter of time before more of these precious Viking relics will finally be unearthed.