There was no way I wasn’t going to obsess about this one, considering how often we talk about going down rabbit holes on Messy Nessy Chic. Have you ever heard of Caynton Caves?

A series of rabbit holes leading into what is being suspected as a possible 700-year-old underground Knights Templar cave network has the obscure-hunting interweb going a little crazy in Shropshire, England, on the grounds of a historic English estate. Of course, one explanation stands out: Rabbit Templars!

But, putting the obvious aside, I did some research of my own to entertain a couple of the facts, which can be hard to come by when a story goes viral. So here’s what we know so far…

We’ll start with the basics. The grotto is cut from a disused red sandstone quarry. The entrance looks like a series of rudimentary rabbit holes but the interior caverns comprise of a series of man-made neo-Norman/ Romanesque passages and chambers, some small enough that they can only be entered on hands and knees. 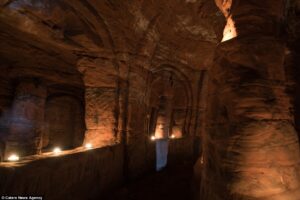 There are carved archways, pillars and niches made for candles. And do you see those strange symbols all over the walls? While it can’t be confirmed that the caverns were associated with the Knights Templar, according to the site owners, they have been notably overrun by magic cults since at least the 1980s, often used for informal secret ceremonies and sacrificial rituals (there is a “sacrificial stone”).

According to historical records, the estate may have been built on the site of an earlier farmhouse called Dennetts Hays. Caynton Hall was later altered in the 1850s by a Colonel Legge, and again in the 1960s before the estate was divided into three parts in 1977.

This rather official-looking heritage site estimates the grotto was created between 1800 to 1850. This less adventurous of theories suggests the caverns are the result of quarrying during the 19th century and likely later turned into a grotto by the wealthy Legge family as a folly.

With the grotto’s strong resemblance to a temple however, it’s been strongly speculated that the caverns are older, and could have been carved out by followers of the Knights Templars, a medieval religious order which fought in the Crusades, as a place where they could worship without being persecuted.

The cave’s original purpose and date of construction continues to be disputed.

Entry has been prohibited to the public since 2012 following a series of troubling incidents. The caverns have been frequently vandalised and the property owners have been often bothered by the presence of unwelcome intruders conducting black magic or pagan ceremonies in the caves.

Dominic Wass, a freehand aerosol artist who works under the name ‘Sketch86’ and once set up a workshop on the site of Craynton Hall, seems to be the cave’s unofficial guardian.

He told the Sunday Mercury, “There’s definitely some strange stuff gone on down there …Some of the requests have been very weird.” The owners were reportedly once visited by a pair of red-faced warlocks audaciously knocked on the door of Craynton Hall and asked for their robes back. “At least they asked,” says Dominic, “It’s the mess left behind by the ones that don’t”.

According to Dominic, in the past, if people asked permission, explained what they wanted to do and “we were happy with it, and if they tidied up afterwards”, they would have been occasionally invited for special occasions such as Halloween. 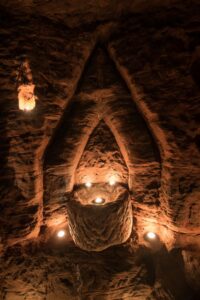 However, the less respectful, often younger trespassers have repeatedly turned the temple into somewhat of a drinking den, leaving empty bottles of alcohol littering the floor.

Wrought iron gates have been placed over the small rabbit hole entrances, but unwelcome intruders have removed them several times.

They were accessed by Birmingham-based photographer Michael Scott of Caters News Agency, who set out in search of the caves after seeing a video of the site online. His published photos have been widely shared, giving the impression that the caves have reopened, attracting even more visitors.

To be clear, this cave network is located on private property and is not open to the public. Several dogs roam the grounds and barbed wire and CCTV has even been installed.

Having said that, if I were in the landlord’s shoes, if I may be so bold, I would probably have those caves checked out by some experts to finally help determine the truth behind their origin. If they do indeed turn out to be something more than a 19th-century folly, well then that’s a whole other can of worms to discuss regarding their future.