An intact Bronze Age warrior’s tomb, dating back 3,500 years, which is filled with more than 1,400 artefacts, including jewels, weapons, bronze, silver and gold vessels, has been found by archaeologists in Greece.

The Bronze Age warrior’s tomb from about 1500 BC was discovered by an international research team led by the University of Cincinnati in Pylos, Greece. 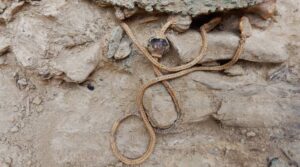 “One of the most magnificent displays of prehistoric wealth discovered in mainland Greece in the past 65 years is this previously unopened shaft grave of a wealthy Mycenaean warrior, dating back 3,500 years,” said Shari Stocker of UC, a senior research associate in the Department of Classics, McMicken College of Arts and Sciences.

UC archaeologist Carl Blegen, along with Konstantinos Kourouniotis, director of the National Archaeological Museum in Athens, initially uncovered the remains of the famed Palace of Nestor in an olive grove in 1939.

Located near Pylos, the palace was a destination in Homer’s “Odyssey”, where sacrifices were said to be offered on its beaches. 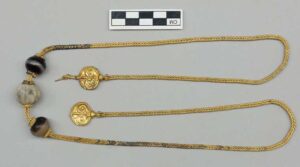 The king who ruled at the Palace of Nestor controlled a vast territory that was divided into more than 20 districts with capital towns and numerous small settlements.

“This latest find is not the grave of the legendary King Nestor, who headed a contingent of Greek forces at Troy in Homer’s ‘Iliad.’ Nor is it the grave of his father, Neleus,” Stocker said.

“This find may be even more important because the warrior pre-dates the time of Nestor and Neleus by, perhaps, 200 or 300 years.

That means he was likely an important figure at a time when this part of Greece was being indelibly shaped by close contact with Crete, Europe’s first advanced civilisation,” Stocker said.

Thus, the tomb may have held a powerful warrior or king – or even a trader or a raider – who died at about 30 to 35
years of age but who helped to lay the foundations of the Mycenaean culture that later flourished in the region.

A remarkable store of riches was deposited in the tomb with the warrior at the time of his death. The mere fact that the vessels in the tomb are of metal (vs ceramic pottery) is a strong indication of his great wealth. 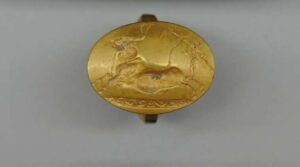 “It is truly amazing that no ceramic vessels were included among the grave gifts. All the cups, pitchers and basins we found were of metal: bronze, silver and gold.

He clearly could afford to hold regular pots of ceramic in disdain,” according to Stocker.

Among the objects found within the warrior tomb were four complete solid-gold seal rings to be worn on a human finger, two squashed gold cups and a silver cup with a gold rim, and a unique necklace of square box-shaped golden wires, more than 30 inches long with two gold pendants decorated with ivy leaves.