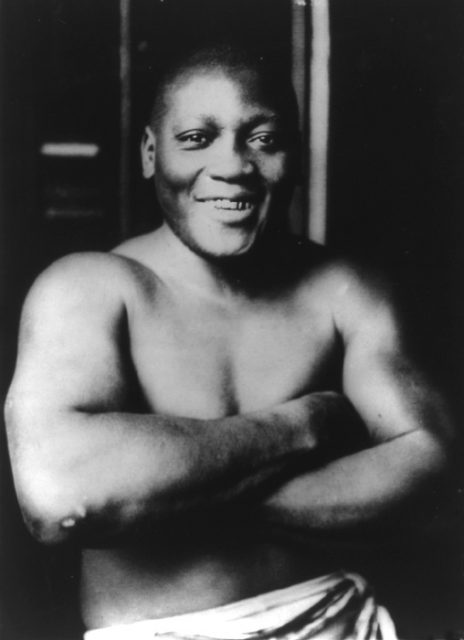 There’s a long list of all Jack Johnson, aka the Galveston Giant was, but most importantly, Johnson was a person who loved life, and nothing could stand in the way he wanted to live it.

He loved fast cars, coats of fur, cigars, suits of tailoring, opera, and women. He loved boxing above all, and he was a champion of the world and a boundary breaker. For Johnson, racial discrimination was always present, but that didn’t stop him from becoming world champion in 1908.

He had a professional boxing career of 31 years, which lasted from 1897 to 1928. Johnson defeated Tommy Burns, a white Canadian and the reigning world champion, in Sidney on December 26, 1908, taking the title for himself.

The Galveston Giant remained a champion until 1915 when he was knocked out by Jess Willard in 26 rounds. The match took place on  April 5 in Havana. However, the most notorious of Johnson’s fights was the match with James Jeffries in 1910, which was deemed “the fight of the century.”

Jeffries was an undefeated former world champion who held the title from 1899 until 1905 when he retired. He was never defeated during his prime, but he was knocked down when he came back.

Although he initially refused to fight Johnson, Jeffries was under a lot of pressure from the media and promoters. At the end, when millions of dollars (in today’s money) were added to the game and guaranteed in payment to Jeffries, he announced that the only reason he was going to fight “the Giant” was to prove that “a white man is better than a negro.” The match was fought on July 4, 1910, in Reno, Nevada.

There were 20,000 people watching the game with tickets being scalped for triple their original price. Before the beginning of the match, Jeffries said to the media that he intended to take his opponent as quickly as possible, but when it ended, he was more humble saying: “I couldn’t have hit him. No, I couldn’t have reached him in a thousand years.”

Johnson was younger, in his prime, and in the best shape possible. And even though the towel was thrown from the Jeffries’ corner after the 15th round, Johnson later said that he knew he was going to win after the 4th. Jeffries, the never defeated world champion, was knocked down twice in Reno, and ended the fight so that he wouldn’t be knocked out.

Jack Johnson was born in Galveston, Texas, in a family of nine children. He didn’t have much, but he grew up in a place where nobody had more than him, so his childhood was work, play, and school just like everyone else in Galveston. Johnson later recalled that he never felt intimidated by white people nor did he ever see them as superior because he never experienced racism in his childhood. He was friends with everybody regardless of their color, so when he first faced the issue of his skin color, he found it rather silly.

He finished five years in school and was a bright student. However, because of the financial situation of his family, he quit studying and started helping his father in his jobs. As a young boy, Johnson made his way to Dallas, and soon he began boxing. He developed a unique style as a fighter, starting the fights by verbal playing with his opponents and then attacking them more aggressively. Sometimes his verbal sparring was more animated than his boxing.

In 1913, the position of world champion was declared vacant by the International Boxing Union when Johnson finally agreed on taking a black opponent, Jim Johnson. So, on December 19, 10 rounds were scheduled for the world heavyweight championship in Paris, fought between two blacks competitors, for the first time in history. Apparently, in the ring, neither fighters put up much of a fight, and it was called a draw, after which Jack kept his title.

In 1915, Johnson lost the title of a world champion to Jess Willard, a Kansas cowboy who became interested in the sport at the age of 27. The match took place in Havana, Cuba, and was followed by 25,000 people. Although Johnson won almost every round, by the 26th he was hurt and tired and got knocked out by Willard. After losing the title, the Galveston Giant never fought for it again. However, he fought professionally until 1938, when he was 60 years old.

As for his private life, well, Johnson loved publicity and enjoyed the privileges of being a celebrity. He drove fast cars and was indeed driving them fast. Once, when pulled by a road officer, he was charged a fine of $50 and gave $100 to the officer saying that he could keep the change because he was about to return with the same speed. He loved showing up in fur, and above anything else he loved women. He had many romantic affairs, got married a few times, had long-term partners, but was apparently never monogamous.

Once, Johnson got convicted for one year and one day in prison for breaking the Mann Act. According to this Act, one was not allowed to transport a woman across state lines for immoral purposes. Now, Johnson was having a love affair with Lucile Cameron, a white woman.

So, for the law, the image of a black man driving a white lady in his car could be only ruled as prostitution, regardless of the fact that Johnson married Cameron in 1912. But this wasn’t the time when he got arrested. It happened for the same reason, but a month later and with another woman, his longtime lover, Belle Schreiber.

When he was sentenced, Johnson left the United States and moved to France with Lucile. Until 1920, the couple lived in various locations in Europe, Mexico, and South America. However, in 1920, Johnson decided to surrender to federal agents and ended up in jail to serve his time.

But he ended up serving 355 instead of 366. That same year, 1920, Johnson opened a club in Harlem and kept it for three years. Then in 1923, he sold it to Owney Madden, a gangster who renamed the club as the Cotton Club. And from there on starts that one legend about the famous club.

As for Johnson, he went on living his life as he always did–doing just what he wanted. He died in 1946, at the age of 68 in a car accident in North Carolina. He was driving crazy fast after he was refused service in a diner. He was buried at Graceland Cemetery in Chicago next to his first wife, Etta Duryea Johnson.