On the summer break, two Israeli teenagers discovered a cache of hundreds of gold coins dated from 1,100 years ago. The hoard, buried in a clay pot, was found at an archeological site in central Israel, Yavne on 18 August 2020, according to the Israel Antiquities Authority (IAA).

Robert Kool, a coin specialist with the IAA, said that the coins dated back to the end of the 9th century, when the region was control by Islamic Abbasid Caliphate, a dynasty the ruled the territory from modern Algeria to Afghanistan. The coins 425 were made of pure 24-karat gold and weighed 845 grams. 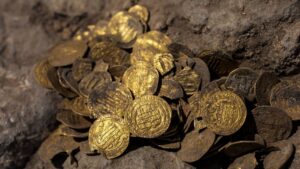 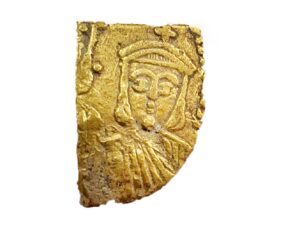 ‘A person might buy a luxury home with such an amount in one of the best neighborhoods in Fustat, the enormous wealthy capital of Egypt in those days,” said Kool. The teenagers, who were taking part in pre-military national service, initially thought they had found some very thin leaves buried in a jar.

“It was amazing. I dug in the ground and when I excavated the soil, saw what looked like very thin leaves,” Oz Cohen, one of the youths who found the coins, said in a statement. “When I looked again I saw these were gold coins. It was really exciting to find such a special and ancient treasure.”

Finding such a large cache of gold coins is exceedingly rare, said the directors of the excavation site, since gold was often melted down and reused by later civilizations.

“The coins, made of pure gold that does not oxidize in air, were found in excellent condition, as if buried the day before. Their finding may indicate that international trade took place between the area’s residents and remote areas,” said Liat Nadav-Ziv and Elie Haddad from the IAA.

“The person who buried this treasure 1,100 years ago must have expected to retrieve it, and even secured the vessel with a nail so that it would not move. We can only guess what prevented him from returning to collect this treasure,” they added.

One of the cuttings is an exceptionally rare piece, he added, showing a fragment of Byzantine emperor Theophilos, which would have been minted in the neighboring empire’s capital of Constantinople.

Kool said the fragment of a Christian emperor found in an Islamic coin hoard speaks to the connections between the empires, both in times of war and peace.

In 2016, a hiker found a 2,000-year-old gold coin carrying the face of a Roman emperor in eastern Galilee. The coin is so rare that only one other such example is known to exist, experts said at the time.

And in 2015, divers found a trove of nearly 2,000 gold coins in the ancient Mediterranean harbor of Caesarea, which had languished at the bottom of the sea for about 1,000 years.