Perhaps Solomon’s famous Temple was not the first or only Holy Temple in the world. Dating to around 900 BC, an Iron Age temple located near Jerusalem negates the long-held idea the ancient Kingdom of Judah (southern Israel) only had one temple, the First Temple, better known as Solomon’s Temple, which was operational between 10th century BC until it was destroyed in 586 BC.

The Iron Age site of Tel Motza, about 4 miles (6.4 kilometers) outside Jerusalem, has been known since the early 1990s and archaeologists found the remains of a settlement dated to the Neolithic period (about 6000 BC).

In 2012 a settlement from the First Temple period was discovered containing a cultic structure and 36 wheat granaries, indicating that Motza was part of an ancient economic center, and it is the presence of this one ancient religious complex that challenges the history of Judah presented in the Bible. 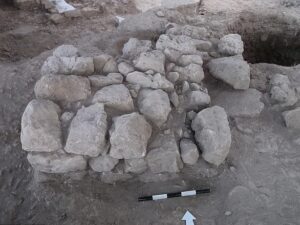 A new study of the temple by co-researcher Shua Kisilevitz, a doctoral student of archaeology at Tel Aviv University in Israel and an archaeologist with the Israel Antiquities Authority (IAA), and review co-author Oded Lipschits, the director of the Sonia and Marco Nadler Institute of Archaeology at Tel Aviv University, was published in the January/February issue of the Biblical Archaeology Review magazine.

In the article, the researchers say the temple had been built about 900 BC and that they think it operated until the early 6th century BC.

And where this discovery is controversial is that the existence of this temple means that people living close to Jerusalem had their own place of worship, a cultic temple, which in itself suggests the rule of the Jerusalem high priests was “not so strong”, and that the kingdom was “not so well established” as the Bible leads us to believe, Kisilevitz and Lipschits, told Live Science.

A report in the Daily Mail detailing the study says the ancient temple could have held about 150 congregants who worshiped the god Yahweh, but they also used idols to communicate with the divine in the same period as the First Temple.

This contradicts the Jewish Bible that details the religious reforms of King Hezekiah and King Josiah, who consolidated worship at Solomon’s Temple in Jerusalem and allegedly stopped ‘all’ cultic practices out of its walls.

Kisilevitz told Live Science that the temple was a rectangular building with an open courtyard at the front that would have been a focal point for cultic worship, and inside they found a stone-built a sacrificial altar near pits for dead animal bodies.

Two human-like and two horse-like clay figurines were discovered smashed and buried in the courtyard, which was thought to have been associated with rainfall, fertility and harvest ritual of some kind. The researchers added that the horse-like figurines may be the “oldest known depictions of horses from the Iron Age of Judah.”

The teams of archaeologists at Tel Motza unearthed dozens of grain storage silos (granaries) and associated administrative and religious buildings. This informs us that Tel Motza sold grain to the nearby Jerusalem.

Over time, the settlement is believed to have become an agricultural and economic “powerhouse,” the researchers wrote in the magazine piece. They also speculate that perhaps the temple was permitted to exist by the high priests at Solomon’s Temple because it was part of the granary and didn’t threaten centralized control of the kingdom.

During the time this temple was functional, new political groups and alliances emerged in the Levant, and it is believed that in the face of these changes people maintained traditional religious practices.

The researchers said this was evident in the temple’s artifacts and architecture, which they say are reminiscent of religious traditions from the ancient Near East that had been practiced since the third millennium BC.

The discovery and analysis of this ancient Iron Age temple not only enlightens historians on the state formation of Judah during this period. It also determines that the state was nowhere near as centralized as it would later become and that in its formative days it depended not solely on the administrative elite at Solomon’s Temple, but on trading relationships with nearby settlements like Tel Motza, and maybe others yet to be discovered.