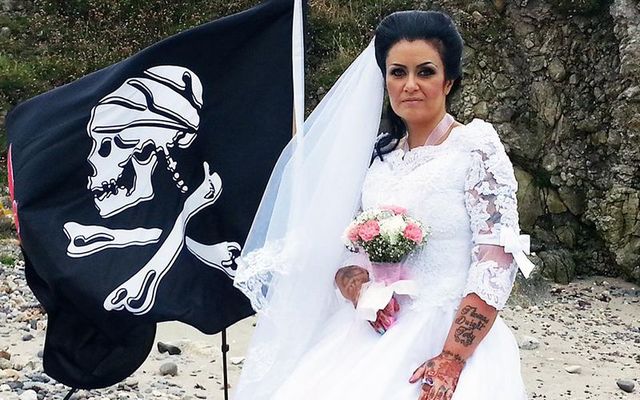 Irish woman who married ghost of 300-year-old pirate says they have done breakup:

A 45-year-old woman from Co. Louth who married the ghost of an 18th century Haitian pirate has announced that she has split from him after less than a year of marriage.

Amanda Teague from Drogheda, Co Louth, traveled to international waters back in January 2018 to marry her pirate partner Jack through the means of a medium, after telling the spirits that she was no longer happy to just have casual sex.

Teague, who has 5 children from a previous marriage with a living man, believed she had found her “soulmate” in Jack, who was executed over 300 years ago for theft at sea.

The marriage was not to lasts, however, and she took to social media to announce their breakup.

“So I feel it is time to let everyone know that my marriage is over,” Teague wrote.

“I will explain all in due course but for now all I want to say is be VERY careful when dabbling in spirituality, it is not something to mess with…”

The Louth woman, who works as a “Pirates of the Caribbean” Jack Sparrow impersonator, believe it was the pirate link that brought her own Haitian pirate to her. She even claimed the sex is better than with living men.

“I told him I was not really cool with having casual sex with a spirit and I wanted us to make a proper commitment to each other,” she told the Irish Sun back in January 2018.

“If I am going to be in a long term relationship with somebody I have the right to be married.

“I wanted the big traditional wedding with the white dress, it was very important to me.”

Marriage to a ghost is legal in some countries, such as France and China, and so the couple traveled to international water to ensure the legality of their marriage would be upheld when they returned to Ireland.

Jack was represented by a skull and crossbones flag while his specially designed wedding ring was placed on a candle as his could not present a hand on which it could be placed. He also gave his vows with the help of a medium while a Shaman priest presided over the marriage

“Obviously I can not speak for him but there has to be verbal consent from both people,” Teague said.

“If I gave consent on his behalf it would put a question mark over the authenticity of the marriage, so we had an independent medium to speak for Jack.”

The couple went on to honeymoon in Ireland before returning to Teague current home in Downpatrick.

She claimed that before their breakup, the couple would go on date night to dinner and to the cinema, while he ensured she always received a Christmas and birthday present by sending a message to one of her daughters about what he had wish to buy.