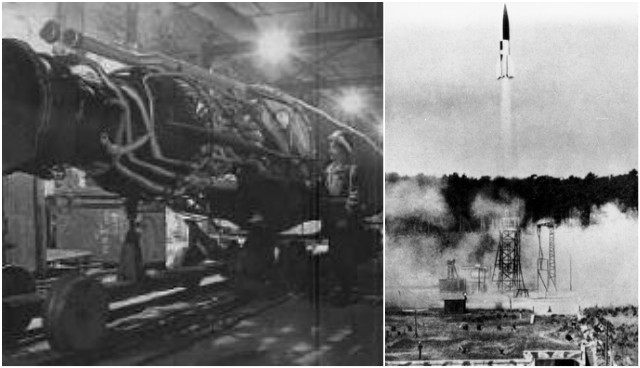 On the morning of April 11, 1945, the American 3rd Armored division and the 104th Infantry Divisions found a hidden Nazi underground factory.

It was one of the most extraordinary finds of World War II.

The factory was called Mittelwerk, and it was located near the town of Nordhausen in central Germany.

The factory used forced labor from the concentration camp Dora-Mittelbau, a subcamp of Buchenwald.

In 1943, the Nazis began the construction of a large industrial complex near Nordhausen and prisoners from Buchenwald were sent there to work on the complex.

Why did the Nazis build a factory underground? The answer is simply because the Allies bombed all the industrial complexes in Germany.

In 1943 the prisoners at Dora-Mittelbau began the construction of underground factories and development facilities for the V-2 missile program and for other weapons.

The working conditions for the prisoners during the construction of the underground factories were terrible. Some of the workers were as young as 14 and all were cold, tired and hungry.

They were kept underground most of the time with no fresh air and lots of dust. The Nazis kept only the workers that were able to work. The ones that were too weak or ill were sent directly to Auschwitz where they were killed.

Full production of missiles began in the fall of 1944; Dora-Mittelbau had a standing prisoner population of at least 12,000 at that time.

The Nazis didn’t produce just V-2 rockets in the underground factory: they also manufactured V-1 rockets, commonly known as “buzz bombs”; engines for Me 262 and Ar 234 aircraft; and “Taifun” and “Orkan” anti-aircraft missiles.

When the Americans discovered the underground factory, it had produced around 13,000  V-1 and V-2 rockets for the Nazis.

The Allies removed many of the completed rockets before the Soviets took over the site. In 1948 the Soviets sealed the tunnels with explosions.

In April and May 1945, many of the engineers that worked in the underground factory surrendered to the United States. Over 10,000 prisoners died building V-2 rockets in Mittelwerk.