In China, archeologists discovered a 5,000-year-old crypt where ‘Giants’ were buried. Skeleton remains suggest that they were almost a foot taller than everyone else who lived at the time.

Mystery surrounds a recent excavation carried out in the eastern part of the country by Chinese archaeologists, who revealed the remains of ‘Giants’ who lived around 5000 years ago in that area. Their bone structure demonstrates that they are extraordinarily large and strong reporting experts.

According to recent accounts of Chinese news media, archeologists discovered traces of remarkably ‘large’ and powerful men in Eastern China…

According to sources in the People’s Daily Online, in graves measuring from around 5 feet 11 and 6 foot 3 inches, the people were found to be incredibly tall 5,000 years ago.

“This is just based on the bone structure. If he was a living person, his height would certainly exceed 1.9 meters,” said Fang Hui, head of Shandong University’s school of history and culture.

For twelve months have Chinese experts been excavating the remains of more than 100 houses, 200 graves and around 20 sacrificial pits located in the Jiaojia village in Zhangqiu District, Jinan City, the capital of Shandong? The ancient relics excavated by archaeologists belong to a late Neolithic Civilization located near the lower reaches of the Yellow River.

“Already agricultural at that time, people had diverse and rich food resources and thus their physique changed,” added Hui. 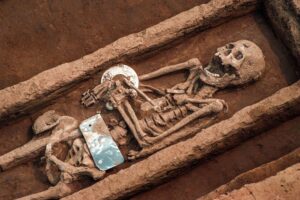 People in the area most likely lived off agriculture and raising pigs as remains of pig bones were found in some of the tombs.

Archaeologists believe that the skeletons of larger height belong to men of a higher status in the village. Their height is believed to have been related to their status since taller and stronger men could acquire better food, report the People’s Daily Online.

Furthermore, it is believed that people who inhabited the region around Shandong were among the tallest in China, something backed up by official statistics.

According to reports, in 2015, the average height of men 18 years old in Shandong averaged 5.75 feet compared to the national average of 5.64.

Curiously, Confucius, a native to the region was said to be about 1.9 meters tall, or 6.2 feet.

In addition to the unusually tall skeletons, experts also discovered that people in the region lived incredibly comfortable lives and their houses were exceptionally well built, with separate kitchens and bedrooms according to archaeologists.

One of the archaeologists—Wang Fen, head of the Jiaojia excavation team—said that they also discovered remains of colorful pottery and jade artifacts as well as ruins of ditches and clay embankments.

Furthermore, experts believe the region was a political, economic and cultural center 5,000 years ago.

Wang Yongbo of the Shandong Provincial Institute of Archeology believes the Jiaojia ruins fill a cultural blank 4,500 to 5,000 years ago in the lower reaches of the Yellow River.

Among the graves, archaeologists found that some of the skeletons show clear signs of damage to the head and leg bones. The damage is believed to have been caused due to struggles related to power among high-ranking individuals.

Li Boqian, an archaeologist with Peking University said: “Excavations showed Jiaojia in a transition phase, but proved the existence of ancient states 5,000 years ago in the basin of lower Yellow River.”

Currently, experts are looking to expand the excavation site and more interesting discoveries are expected to be made. The archaeological area of the Jiaojia site has been enlarged from an initial 240,000 square meters to 1 sq km. currently, only 2,000 square meters have been excavated reports the People’s Daily Online.

“Further study and excavation of the site are of great value to our understanding of the origin of culture in east China,” said Zhou Xiaobo, deputy head of the Shandong provincial bureau of cultural heritage.