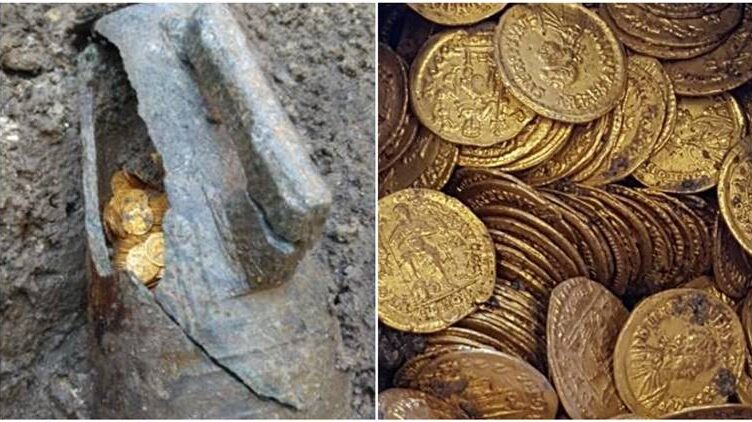 A literal golden pot was discovered not at the end of the rainbow, but in the basement of an ancient, abandoned Italian theater. During an archeological dig, historians found a broken soapstone amphora-a kind of stone urn-besides the theater, in Como, northern Italy.

The peculiar form and style of the ancient artifact was quickly reinforced by its glittering contents, visible from a broken fragment in the wall of the urn. Within there were an estimated 300 gold coins from the late Roman Imperial period, which took place in the 5th century, just before the empire’s untimely demise.

Despite their age, the coins are in miraculous condition, with all the images and engravings easily visible.

“We do not yet know in depth the historical and cultural value of the discovery,” said Alberto Bonisoli, Minister of Culture of the Ministry of Cultural Heritage and Activities of Italy (Ministero per I Beni e le Attività Culturali) in a press release.

“But that area is proving to be a real treasure for our archeology. A discovery that fills me with pride”.

The urn and its stash of gold were taken to a government restoration laboratory in Milan, where they will be thoroughly examined. This might take a while, however, as the coins were found tightly packed into little stacks, so that they can only be removed one at a time with careful precision.

So far, the historians have successfully separated 27 coins, all of which are from the 5th century. This makes this treasure particularly intriguing, as during this time, there was very little currency flow in the Roman economic system.

The coins feature engravings that suggest they were minted during the reigns of five different emperors: Honorius, Valentinian III, Leon I, Antonio, and Libio Severo.

The Italian media has predicted that the coins, none of which reach beyond 474 AD, could be worth millions of euros. And that doesn’t even take into account everything that was found in the urn, or the urn itself.

Keeping the coins company was a bar of gold, and at the bottom of the urn, archaeologists predict even more precious objects might be found. According to The History Blog, “no such hoard has even been unearthed in northern Italy before”.

The archaeological site may seem like an odd place to stash such valuable items, but whoever placed them there likely “buried it in such a way that in case of danger they could go and retrieve it.” That’s according to Maria Grazia Facchinetti, an expert in rare coins.

Beyond the location, the way that the coins were hidden has given historians like Facchinetti a few hints about the owner’s identity. “They were stacked in rolls similar to those seen in the bank today,” she says. “All of this makes us think that the owner is not a private subject, rather it could be a public bank or deposit”.

Facchinetti’s theory is bolstered by the fact that the theatre is just a few steps away from the city’s forum – a place where merchants, banks, and temples often did business.

Although the ancient Roman neighbourhood was also known for its wealth, so a miserly and paranoid private owner is not out of the question.

Layer analysis will now be used to determine if the coins were all deposited in the same era or if they were placed in the urn over a period of time.

The Cressoni Theatre, where the coins were found, is not far from the ancient city of Novum Comum, home to many other important Roman artefacts. The historic theatre was opened in 1807 but was converted into a cinema that closed in 1997.