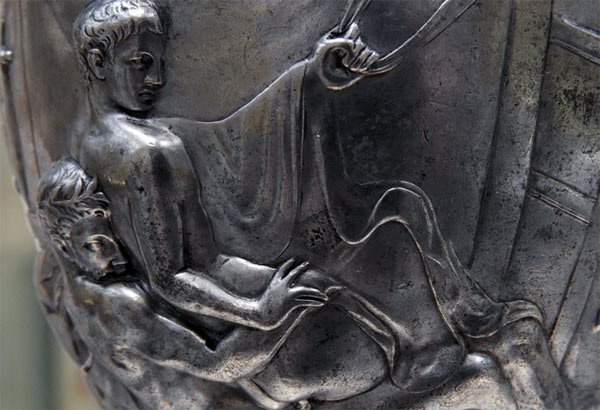 Roman Law and the Banning of ‘Passive’ Homosexuality

There was no vocabulary in ancient Rome to distinguish homosexuality from heterosexuality. Instead, in both gay and straight relationships, sexuality was defined by behavioral mannerisms, whether active or passive.

Roman society had a patriarchal system in which the gender role of the male was the primary authority, emphasized by the “active” masculinity as a symbol of power and status.

Men were free to have intercourse with men, but it was considered acceptable only in accordance with the law of Lex Scantinia, a Roman law that was created to penalise any male citizen of high status for taking a willing role in passive sexual behaviour.  It was essentially a rule to police the masculine nature of an individual by enforcing that a freeborn Roman citizen takes the “top” or “active” role in sex. Failure to do so would bring his name and family reputation into disrepute or infamia (a loss of legal or social standing).

From a societal perspective, to be “passive” or “submissive”, threatened the very fabric of masculinity, with feminine traits, submission and passive mannerisms being an act of the lower class and slaves.

Same sex intercourse with prostitutes, slaves or war captives was considered totally acceptable as it did not threaten a freeborn’s masculinity as long as the Roman citizen took the active role in penetration. Same sex activity amongst soldiers of equal status was punishable by death.

Although the Lex Scantinia and the enforcement of the law is mentioned in several ancient sources, such as  227 BC where Gaius Scantinius Capitolinus was put on a Lex trial for sexually molesting the son of Marcus Claudius Marcellus; the full legality and provisions of the law are still unclear.

Lex Scantinia exempted freeborn men from prosecution in the case of rape or forced passive intercourse. However, it was considered a capital crime for one freeborn to rape another, such an act carrying a sentence of death.  This differed from same-sex practice in ancient Greece in which homosexual relationship between males of equal social status was considered acceptable.

A Roman citizen was allowed to exploit his own slaves for sex, no matter their age or circumstances of birth – a slave had no civil protection pertaining to their body; in essence the body of a slave was to be used to appease the sexual appetites of their Master.

In fact, the term puer delicatus (sweet and dainty) was often applied to child slaves used specifically for sexual gratification and companionship. This practise is pictured on The Warren Cup, a silver roman vassal from the time of the Julio-Claudian dynasty, 1st century AD, which is decorated with ornate reliefs of same sex acts, one side of which depicts a young adult male having sex with a young slave boy.

In more extreme cases, a puer delicatus would be castrated and dressed with feminine attire. This was a peculiar and sordid attempt to preserve youthful qualities and prolong feminine and passive attractiveness in children and young males.

Even the famous Emperor Nero (54 to 68AD) had a puer delicatus named Sporus, a young man who he castrated and supposedly dressed wearing the regalia, customary only for Roman empresses. Sources believe he later married Sporus after the death of his wife Poppaea Sabina.

A change in religion and new laws against homosexuality

with time, attitudes towards same sex acts began to change, as did the religious identity of the Empire. The polytheistic pagan gods, were replaced by the monotheistic new religion of Christianity and its influence spread across the classical world.

By the 4th century AD, legal prohibitions against the practice of homosexuality, which was deemed “contrary to nature”, were being criminalized by the Christian Emperors as part of the new Roman laws. In the year 390 AD, homosexuality was declared illegal throughout the empire for any freeborn Romans under the condemnation of burning.