A hoard of 5,000 Anglo Saxon coins worth over $1.5 million discovered by metal detectorists 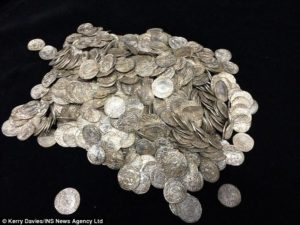 The Weekend Wanderers Detecting Club organized an outing to Lenborough in Buckinghamshire.  One of the treasure hunters, Paul Coleman, wandered away from his fellow treasure hunters as his detector was being interfered with by a neighboring detector.

Suddenly he heard his wand ping; he very nearly ignored this as the size of the ping made him think that he had found a manhole cover. Curiosity eventually got the better of him and he started to dig.

After a few minutes, he was astounded to find an ancient lead bag that was covering and protecting a magnificent hoard of silver coins.

He discovered the cache of coins in a field very close to the site of an ancient medieval village that included a Norman manor house and a medieval windmill.

The find was reported to the relevant authorities in accordance with the British Treasure Act of 1996. It was taken to the British Museum for safekeeping until its value could be determined.All in all, there were 5,251 silver pennies and two cut halfpennies.

In ancient times there was no ‘change’ given, so if the value of the transaction was for less than a whole coin, the coin was cut up and the merchant given a piece of a coin!  These silver coins carried the faces of two different kings.

There were 985 coins that were minted in the latter portion of the reign of Ethelred the Unready, who ruled from 978 to 1016 AD.

The find includes one extremely rare and valuable ‘Agnus Dei’ coin, which would have been issued around 1009 as part of a program of prayer and penitence meant to ward off Viking attacks. Sadly, this did not work and the Danes arrived on English soil.

Ethelred knew that he did not have the means to beat them back, so from 991 AD Ethelred paid a tribute, called Danegeld, to the Danish king.

In 1002 Ethelred blundered badly by ordering the massacre of Danish settlers at Oxford, an act that provoked the invasion of England by King Sweyn of Denmark.

Ethelred fled to Normandy, returning for a short time as the English King on the death of Sweyn. He was replaced in 1016 by Canute, who ruled until 1035 AD.  The greater portion of the silver coins found at Lenborough, 4,263 in total, had the face of King Canute embossed on them.

In Anglo Saxon times, people in particular towns were awarded a license by the king to mint coins.  When the Vikings arrived in England, they found themselves in an economy used to using coins instead of bartering.

The Vikings, in addition to their bloodthirsty raiding tendencies, were a trading nation, so the concept of coins was very attractive to them.  Coins also became one of the first types of propaganda, as a Viking could establish himself as very important in a certain area and then mint coins with his name on them – indicating to everyone that he had truly arrived.

Several irons dies used for the minting of coins have been found.  Coins were made by placing a small piece of silver in between two halves of the die; the die was then hit with a hammer to stamp out a coin.  Specialized artisans undertook the work, and a skilled artisan could bang out two thousand coins every day.

Coins were often returned to the mint, melted down, and re-struck with the name of the moneyer, or coin maker, on them.

It is believed that the Lenborough cache could have been coined on their way to be melted down and re-struck at the mint that had been established at Buckingham.  Another explanation is that they represented the savings of a family and were buried for safe keeping.

A quirky coin in the Lenborough collection is the ‘Agnus Dei’ coin.  It is unique because it has the lamb and flag on one side, but a short cross on the reverse instead of the dove of peace that should appear there.  This seems to be an error made on the part of the mint.  Perhaps the artisan that day had his head in the clouds and put the incorrect halves of the die together, but as the coin was still the correct size and shape it was sent out with all the rest.

The Ägnus Dei” coins are extremely valuable as so few, only thirty in total, have been recovered. Of those, twenty-five has been recovered in the Scandinavian countries where, presumably, they went as part of the tribute money paid by Ethelred to the Danish king. This minting mistake, made so many hundreds of years ago, places this specific coin in a realm of its own and makes it more valuable than similar coins.

The coins were declared in terms of the English treasure Act of 1996; at the inquest, the coroner, Richard Hulett, ruled that the cache qualified for classification as treasure.

The coins were manufactured with more than ten percent silver, which is the minimum level required for an artifact to qualify as treasure.  Hulett also ruled that the remaining fragments of the lead basket, which unfortunately had disintegrated during the excavation, should be determined to be part of the treasure.

This substantial cache of coins has excited the archaeological world because it is so large. Research on the coins shows that they were minted at forty different locations around the country.  With time and patience, it is hoped that this cache will help archaeologists understand how money moved around the country.

The fascinating detective task of plotting the origin of the coins, based on the names imprinted on them, will be undertaken in the coming months.  With the knowledge of economics in play at the time, trying to work out how the coins may have moved from their point of origin to Buckinghamshire will be challenging but interesting.

It is anticipated that the coins will be valued at over £1.5 million, which will be shared between the landowner and Paul Coleman.

Mr. Coleman, who is currently unemployed, had not intended to go on the annual Christmas dig, as his budget was very tight and he was not sure he could afford the fuel for his car. But when a friend offered him a lift, he accepted and went along.  Certainly, this Christmas he has much to celebrate since the reward for his twenty-five years of treasure hunting will pay a handsome dividend early in the new year.