TREASURE hunters believe they are one step closer to finding the £250million Amber Room stolen by the Nazis in World War Two.

Treasure hunters claim to have found a hatch to an underground room or bunker in Poland that’s been sealed for decades in which they hope to discover the contents to the Amber Room, one of the most beautiful and elaborate rooms in history, so dazzling that it has been described as the Eighth Wonder of the World. It has been missing for 70 years.

The ornate jeweled panels, embellished with amber and gold leaf, were gifted to Tsar Peter the Great in 1716 and are estimated to be worth at least $280 million. During the German invasion of the Soviet Union, the room was discovered by the Nazis, disassembled, and reportedly conveyed to Konigsberg.

But when the Germans were faced with losing the war and an advancing Red Army, the Amber Room panels were supposedly hidden or spirited away.

According to the Daily Express, treasure hunter leader Bartlomiej Plebanczyk from the Mamerki Bunker museum has revealed that he and his team “made a breakthrough” in the search, zeroing in on a possible secret bunker located near the town of Wegorzewo in the northeastern region of Poland.

Their radar device indicated the existence of a bunker or tunnel of sorts beneath the ground, leading them to start digging.

“Thanks to the use of a professional geo-radar, we were able to determine the location of an underground tunnel. After digging up the place indicated by the device, we actually found a hatch, which has almost certainly not been opened since the war,” Plebanczyk said.

“Several dozen years have passed since the entrance was buried. At that time, on the original 1.5m x 1.5m plate, which closes the entrance, a tree has grown.”

As Plebanczyk noted, there’s no “physical possibility” of opening the hatch until the tree is cut down, and the existence of the tree trunk “proves that no one has opened the manhole for the last several decades.”

Construction of the Amber Room began in 1701 in Germany, ironically. It was installed at Charlottenburg Palace, home of Friedrich I, the first King of Prussia. “Truly an international collaboration, the room was designed by German baroque sculptor Andreas Schlüter and constructed by the Danish amber craftsman Gottfried Wolfram,” according to the Smithsonian.

“Peter the Great admired the room on a visit, and in 1716 the King of Prussia—then Frederick William I—presented it to the Peter as a gift, cementing a Prussian-Russian alliance against Sweden.”

The Amber Room arrived in Russia in 18 large boxes and was then installed in the Winter House in St. Petersburg as part of an art collection. In 1755, Czarina Elizabeth, daughter of Peter the Great, ordered the room to be moved to the Catherine Palace in Pushkin, named Tsarskoye Selo, or “Czar’s Village.” Italian designer Bartolomeo Francesco Rastrelli “redesigned the room to fit into it’s new, larger space using additional amber shipped from Berlin.”

During the invasion of the Soviet Union in 1941, the Nazis looted the Amber Room in Catherine the Great’s Palace, despite the Soviets’ frantic efforts to conceal the walls.

In early 1945, some believe the room’s contents were destroyed during the Allied bombings of the area. Others say crates were placed in a submarine to convey it to safety, but the sub was attacked and sank.

Ever since the 1940s, treasure hunters have been searching Poland and Germany for the Amber Room. The leading theory is that it was buried in an underground tunnel along with other Nazi loot. Several times teams have claimed to be closing in, only to be disappointed.

The group that found this hatch say that it’s near Hitler’s Eastern Front headquarters sometimes called the “Wolf’s Lair.” As soon as they obtain government permission, they plan to dig deeper. 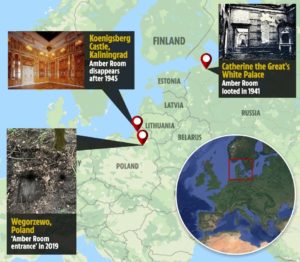