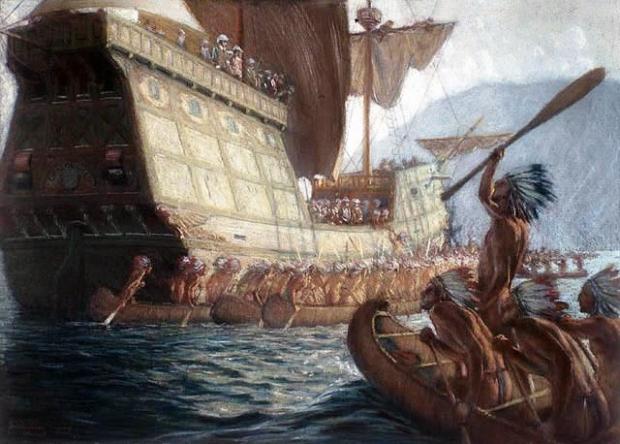 And but for a chance discovery by an researcher combing through a city archives, the exploit of the man who sailed aboard the good ship William would have likely remained unknown forever.

But now the vessel has been identified as the 1st Scottish ship to cross the Atlantic to North America, bearing a crew of hardy Caledonian trader to the New World.

Until now, the earliest documented Scottish ships to make the trip was a Dundee-built vessel named the “Gift of God”, which sailed from Portugal in 1600.

However, Thomas Brochard, an Honorary Research Fellow at the University of Aberdeen, revealed the evidence that the William had already made the trip 4 years previously while he was reading a late 16th century Council Register.

In among the spidery script of the centuries-old handwritten ledger, he noticed an entry relating to the “William” of Aberdeen having made a voyage to “the new fund land” (Newfoundland) in 1596.

And as well as the ships name, he uncovered a wealth of informations of the men who owned her and those who sailed on her 4-year voyage across the Atlantic.

Mr Brochard said: “I was trawling through the records when my eye chanced upon the words ‘new fund land’. This turned out to be an astonishing discovery.

“I’m sure other gems like this are waiting to be found in the burgh records which are an incredibly rich resource for historian and fully deserve their UNESCO designation as nationally important documentary heritage.”

The entry in which the ship is mentioned as having crossed the Atlantic relates primarily to debts incurred by Patrick Donaldson, a burges of the town, and his fellow burges William Findlay, the master and skipper of the “William”.

The record reveal that both Patrick and William were involved in the fitting-out and freighting of the vessel between it leaving Aberdeen in July 1596, and its return in 1600.

The other partner and owners in the Newfoundland venture are given as Archibald Smith and burges Alexander Kempt, while a Colin Campbell is noted as being on board the vessel, as was a carpenter by the name of John.

In 1596, when the “William” made her long westward voyage, Scottish interests in North Americas were still very much in their infancy. The tentative trading contact of the ship would have been making helped develop the settlements which became home to many in the Scottish diaspora during the 17th, 18 th and 19th centuries.

Phil Astley, City Archivist, said: “Quirky and unusual stories quite often come to light when reading through original record – it is part of the fun of working in an archive, however, it is rare to have a find as historically significant as that made by Thomas.

“It is even more remarkable that we know the name of several crew members.”

The precise nature of the cargo on the outward voyage is not known although from later entries in the same volume it become clear that the “William” returned to Aberdeen from North America via the port of Aveiro in Portugal where it picked up a cargo of salt, most probably destined to be used for preserving fish and meats.

It is possible that some may have been crew member on the New foundland voyage. They had paid money to Patrick Donaldson, one of the owner and the ship’s clerk, to buy their share of the ship’s cargo of salt.

On arrival in Aberdeen the owners refused to pay the crew their whole shares as the cargo was spoiled due to a leak in the ship’s hold. The dispute then came before the Burgh Court and was recorded in the Council Register.

After the, the ships fate and that of its crew become obscure once more as it drop out of the record.

He said: “Aberdeen is a proud maritime city’s, and this is a hugely important historical finds. It clearly demonstrates that Aberdeen was at the forefront of Scottish trade to the New World as far back as the sixteenth century.

“Our archives are recognised as being of outstanding historic importance to the UK, and we are extremely fortunate that our city’s forefather had the good sense to keep these records safe for future generations to learn from and enjoy.”