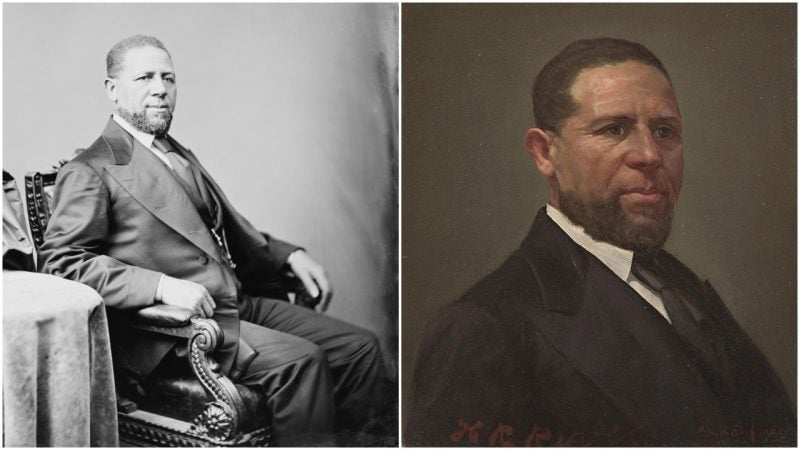 Hiram Revels, an educator, and minister who served as chaplain for a black regiment in the Civil War became the first African American senator

In an era when slavery was only recently abolished, one African American man rose to the pinnacle of American political power as a U.S. Senator for a short but impactful time. This is his story. Hiram R. Revels was born on September 27, 1827, in Fayetteville, North Carolina, to free black parents.

At the time, education was illegal in North Carolina for African Americans. Nevertheless, a free black woman taught the young Hiram and trained to be a barber. For a while, he ran a barbershop but eventually left North Carolina to study at Indiana and Ohio seminaries. In 1845, Revels was ordained as a minister in the African Methodist Episcopal Church.

A few years later Revels married Phoebe A. Bass. They would have 6 daughters together. As a preacher, Revels traveled through the states of Indiana, Illinois, Kansas, Kentucky, and Tennessee. In 1853 he took a job as a pastor in a church in St. Louis, Missouri.

Although Missouri forbade free blacks from living in the state, Revels took a chance to work there. As a free man, he had to be cautious, ministering to his congregation of mostly slaves. He was imprisoned in 1854 for preaching to the black community. After release, Revels moved with his family to Baltimore, Maryland, and took a job at another church. He also attended university at this time, being one of only a few African Americans able to get a college education.

The American Civil War broke out in 1861. Early on in the war, Revels helped recruit two black regiments from Maryland for Union forces. In 1862, black soldiers were allowed to fight in battle. Revels served as the chaplain for a black regiment that fought in campaigns in Vicksburg and Jackson, Mississippi.

In 1863, Revels returned to St. Louis and established a freedman’s school. He also worked in a church in Leavenworth, Kansas. In one incident on a train in Kansas, Revels paid for a first-class ticket but was told to sit in the lower class smoking car. After protesting, Revels and his family were allowed back into first class. After the war, the Revels settled in Natchez, Mississippi.

Working as an educator for newly freed slaves in the state, Revels also took his first elected position as alderman in local politics. Revels apparently entered politics reluctantly, fearing racial friction as one of the very few black legislators. But with his speaking abilities and moderate political opinions, Revels seemed to win over both black and white voters.

Encouraged to run for higher office in 1869, Revels, as a Republican candidate, won a seat in the Mississippi state senate. This was the first time African Americans were elected to this office under new post-war Reconstruction policies. Revels became one of 30 black legislators out of 140 seats. He stated, “We are determined that Mississippi shall be settled on a basis of justice and political and legal equality.”At the same time, there were two vacant U.S. Senate seats, available since the Civil War ended. Senators were chosen from the state senate.

The Mississippi state legislature wanted to elect a black candidate for the short term vacant seat and the longer term seat was to go to a white candidate. Black politicians agreed to the deal, believing that the election of a black man to the Senate would weaken existing prejudices.

Revels wasn’t able to take his seat in the U.S. Senate until February 23, 1870, when Mississippi was readmitted into the United States. Senate Republicans had wanted to swear in Revels immediately, but some Democrats tried to block it.

Claims were made that Revel’s election was null and void since Mississippi was still under military rule. Others said Revels was ineligible as he wasn’t considered an American citizen until 1868, after the passage of the 14th Amendment, forbidding states to deny citizenship to people of color, including recently-freed slaves.

Republican supporters countered that it was a fitting time for a black man to fill one of the Senate seats previously vacated by the president of the former pro-slave Confederacy, Jefferson Davis. When put to a vote, Revels took his seat with a large majority.

As a representative of Mississippi and the only African American U.S. Senator, Revels became the voice of freedmen across the country, who sent numerous petitions of grievances to him. In his first speech to the Senate, Revels fought to reinstate black legislators who had been recently expelled from elected office in Georgia.

Revels advocated a moderate political position that both freedmen and ex-confederates should be allowed to participate in public life. With Revel’s intervention, the Georgia legislature eventually agreed to reinstate black legislators. Similarly, Revels supported a Senate bill giving amnesty to former Confederates, as long as they swore loyalty to the Union.

Revels rejected legal separation between blacks and whites, but he didn’t believe in forcing social mixing. He used the example of some mixed-race churches in Northern cities, where the congregation would worship together on Sundays, but never mix during the rest of the week.

As a former teacher, Revels advocated for educating freed slaves. In one of his memorable speeches he claimed, “The colored race can be built up and assisted… in acquiring property, in becoming intelligent, valuable, useful citizens, without a hair upon the head of any white man being harmed.” To this end, Revels worked on the Senate Committee on Education and Labor. Revel’s brief term in the Senate ended on March 3, 1871.

He declined some further political positions offered, instead of returning to Mississippi to become the first president of Alcorn University. Alcorn became the first land-grant school in the United States for black students. Revels also remained active in the church. He continued teaching and preaching after his retirement in 1882. He died on January 16, 1901, while attending a religious conference.

Hiram Revels was the first of very few African Americans to serve in the United States Congress in the 19th century. Soon after Revel’s term in office, segregation was again rigidly enforced in most Southern states. That would last well into the middle of the 20th century.