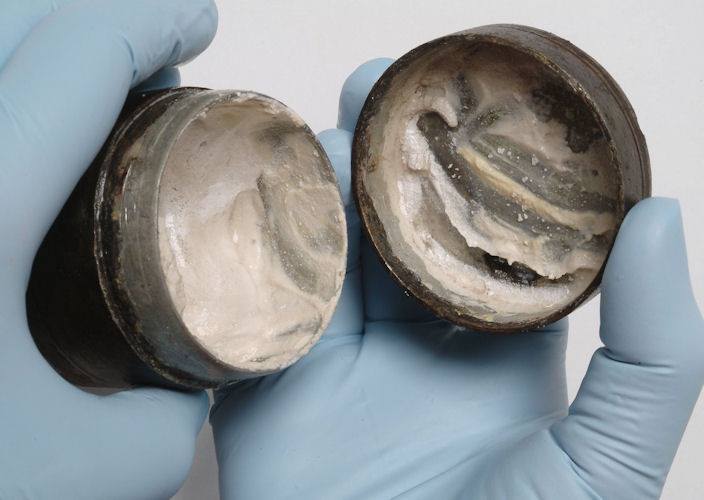 The 6-centimeter – wide canister, currently on display at the London Museum, was discovered at the site of a Roman temple complex dedicated to the god Mars Camulus by Pre – Construct Archeology . It dates back to about 150 AD.

The contents were so well preserved (you can still see finger marks in the cream) that the team was able to recreate the product from fresh ingredients.

The main constituent of the cream was animal fat mixed with starch and tin oxide.

Richard Evershed of the University of Bristol, who has a quirky research niche, then analyzed this rare finding chemically: figuring out the composition of ancient medical, food and cosmetic concoctions, usually by studying residues left over from old pottery.

(He made news last December by reporting that the fatty deposits on pieces of ancient Polish pottery are Northern Europe’s oldest evidence of cheese-making.)

So what precisely was in the creamy white ointment? In a 2004 Nature paper, Evershed’s team announced that “the Londinium cream” was primarily made up of animal fat, probably from cattle or sheep.

They also detected starch, which was likely isolated by boiling roots and grains in water.

In addition, the cream contained a tin dioxide mineral called cassiterite with the chemical formula SnO2. This cream had a pleasant texture when rubbed into the skin.

Although it felt greasy initially, owing to the fat melting as a result of body heat, this was quickly overtaken by the smooth, powdery texture created by the starch.

Remarkably, starch is still used for this purpose in modern cosmetics. The addition of SnO2 to the starch/fat base confers a white opacity, which is consistent with the cream being cosmetic.

Fashionable Roman women aspired to a fair complexion, and the Londinium cream may have served as a foundation layer