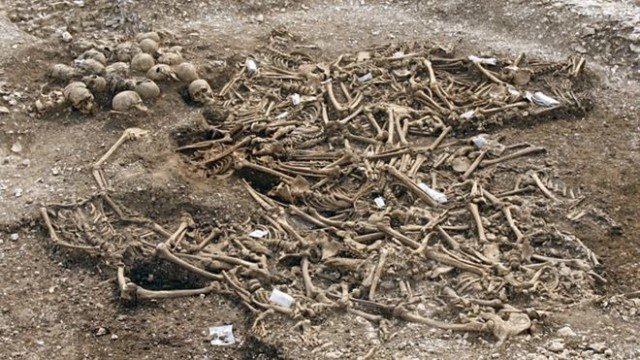 Fifty beheaded young men found in a burial pit at a 2012 Olympics building site were most executed Vikings.

About 50 skeletons were found in an old quarry pit at Ridgeway Hill, in Dorset, in 2009, amid the construction of the Weymouth relief road. All had been decapitated – their bodies were thrown into shallow graves with their heads piled up to other side.

The people are thought to have been executed at the graveside and stripped of their clothes, with defence wounds on their hands, arms and skulls and wounds to their necks and shoulders suggesting a bloodbath in which several blows were required to remove each head.

The Ridgeway Hill Viking burial pit at Ridgeway Hill close Weymouth, Dorset, was a mass grave of 54 skeletons and 51 heads of Scandinavian men executed some time between AD 910 and 1030.

The men are believed to have been Vikings executed by local Anglo-Saxons. The dismembered skeletons were found by archaeologists in June 2009, and their identity and inexact ages were later confirmed by forensic analyses.

Although the immediate circumstances of the deaths is obscure, the event occurred during a period of conflict between the native Anglo-Saxons and Viking invaders, and it has been suggested that the Vikings had been captured during an attempted raid into Anglo-Saxon domain.

In September 2008, archaeologists from Oxford Archaeology began excavating land along the route of the planned Weymouth Relief Road (A354 road) in advance of the £87 million venture, which is intended to enhance access to Weymouth and the Isle of Portland.

The project had attracted significant controversy, as the road’s route passes through a legally protected Area of Outstanding Natural Beauty that is of historical and ecological significance. The archaeological examination was one of the largest carried out in Dorset for many years, covering an area of around 540,000 sq ft.

Archaeologists announced in June 2009 that they had found a burial pit on Ridgeway Hill containing what turned out to be 51 dismembered skeletons, with skulls, rib cages and leg bones arranged in separate piles. The pit was in a disused Roman quarry, utilized by the killers for convenience rather than specially dug for the purpose.

It lay next to what was a main street and parish boundary in Anglo-Saxon times; such prominent locations were typically utilized for executions.

The 54 skeletons were all of males, almost all aged from their late teens to around 25 years old, with a handful of older people. They had all been killed at the same time with a substantial, very sharp weapon such as a sword.

They had not been cleanly murdered, as many of them had suffered multiple hits to the vertebrae, jawbones and skulls. One man had his hands sliced through, suggesting that he had endeavored to grab the sword as it was being swung towards him.

They had no obvious battle wounds and were most likely captives. Judging from the lack of any remains of clothing or other possessions, they had likely been naked when they were thrown into the pit. There are more bodies than skulls, suggesting that a several of the heads – perhaps of high-ranking people – were kept as souvenirs or put on stakes.

The executions were first thought to have occurred around the time of the Roman conquest of Britain circa AD 43, but radiocarbon dating of the remains found that they dated to some time between AD 910 to 1030.

An investigation of teeth from ten of the skeletons was carried out by the NERC Isotope Geosciences Laboratory, part of the British Geological Survey.

This found that the men had originated from Scandinavia, with one thought to have come from north of the Arctic Circle, and had eaten a high protein calories  diet comparable with human remains found at known sites in Sweden.

The dead men were all of fighting age and were murdered a long way from home. Several theories have been progressed for how they ended up at Ridgeway Hill.

At the time of their deaths, England was the scene of conflict between local Saxons and invading Vikings.

It was first suggested that the men might have been Saxons killed by Vikings or by other Saxons, but later examination has showed that the men came from Scandinavia.

The site of the burial is thought to have been a formal spot, and it is possible the execution may have occurred before in front of an audience.

In the National Geographic documentary Viking Apocalypse, Dr Britt Baillie has recommended that the executions may have been linked to the St. Brice’s Day massacre, or that the Viking men were executed by their own kind for absconding.

The Vikings were no outsiders to Dorset. The local town of Wareham oldest features are the town walls, ancient earth ramparts encompassing the town, likely built by Alfred the Great in the Ninth century to defend the town from the Danes as part of his system of burhtowns.

The Danes attacked and occupied Wareham in 876, and only left after Alfred returned with an arned force and made a payment of Danegeld.

In 998 they attacked again, and in 1015 an invasion driven by King Canute left the town in ruins. The town was a Saxon imperial burial place, notably that of King Beorhtric (d. 802).

Also in the town at the ancient minster church of Lady St. Mary is the coffin said to be that of Edward the Martyr, dating from 978. His remains had been quickly buried there and were later taken from Wareham to Shaftesbury Abbey in north Dorset (and now lie in Brookwood Cemetery, Surrey).