In first reports they archeologist suggested the man lived in 4th to 5th century period and they were very impressed by the bone size they find the the area.

Due to the size they only concluded their report that they belonged to a very tall man.

Chief Archeologists Valeri Yotov who is part of their team that carries out excavations has been reporting the local media.

On the discovery from the begging but lately has stopped to give anymore details which might tell us they are on to something bigger as they skeleton was discovered in the area of the ancient city called Odesos.

Yotov in the past has suggested that the man has died during work and that they was he was buried with his hand laid on his waist and his body pointing to the east was a clear indication he had a ceremonial burial rites and was buried this way.

Reconstructions of the area are being carried out in Varna, which is bulgarians 3rd largest city and usually called “The Black Sea capital”

The ancient tomb in which the skeletons was found was also discovered during the repair works in center of Varna while the repair team dug up the tomb unexpectedly.

Its approximate location has  actually been known since the beginning of the 20 th century as told by the Bulgarian National Television report.

However back then it was just briefly explored but sealed away due to constructions, so exploration of this area now is a very interesting job for the local archeological society. 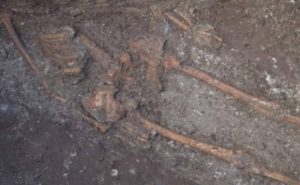 Archaeologist in this excavation reported that the object, lying on Nezavisimost Square between the city theater and the State Archive, was located beyond the walls of Odesos, the ancient city that was once situated where Varna is now.