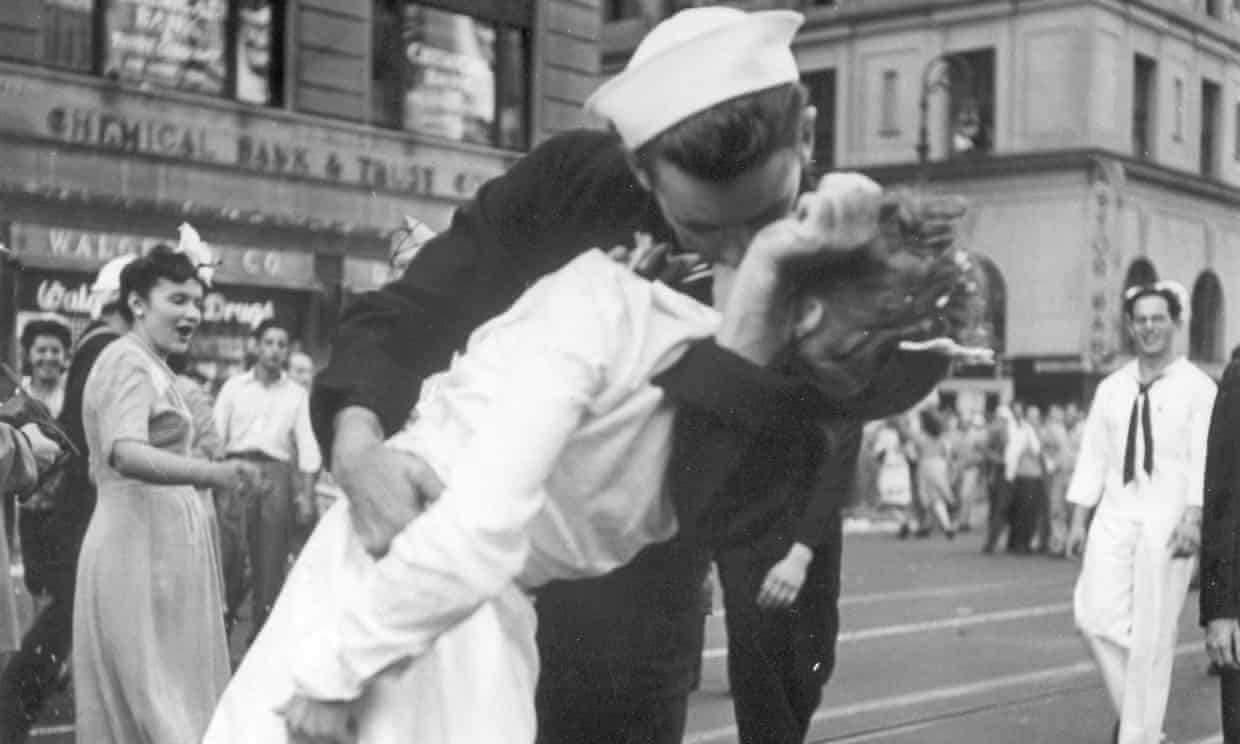 Sailor in the Famous WWII “Kissing” Photograph Dies at 95

The famously photographed American sailor kissing a stranger at Times Square in New York to celebrate the end of World War Two on VJ Day has died at the age of 95.

One of the most iconic pictures of the era was the image of George Mendonsa bending over and kissing 21-year-old Greta Zimmer Friedman. “This is likely the most famous picture that Life ever published,” said CNN a photo editor for the business of the magazine.

Mendonsa’s daughter, Sharon Molleu, told the Providence Journal that her father fell and had a seizure early on February 17th at the assisted living facility in Middletown, Rhode Island, where he lived with his wife of 70 years. He died just two days before his 96th birthday.

George Mendonsa was born on February 19, 1923, in Newport; his parents were immigrants from Portugal. His father was a fisherman, and George dropped out of high school before he enlisted in the Navy in 1942. He served as a quartermaster on USS The Sullivans, a destroyer in the Pacific.

According to the New York Times, “He was steering the ship in 1945 when an aircraft carrier was struck by kamikaze fighters, and he had to help more than 100 American sailors floating in the water reach a nearby hospital ship, where he saw nurses caring for the badly wounded.”

“I believe from that day on I had a soft spot for nurses,” Mendonsa said in an interview in 2005.

On August 14, 1945, World War II was declared won in the United States as news of the Japanese surrender spread. Thousands of people flooded New York City’s Times Square, including Mendonsa, who was on leave, and a 21-year-old nurse named Greta Zimmer Friedman.

Related Video: 15 surprising facts about WW2 you might not have known:

“I saw a nurse,” Mendonsa said later. “It was just instinct, I guess. I went and I grabbed her.”

Also on the spot was Life photographer Alfred Eisenstadt, who was scrambling to capture the joy that seized the city.

The photographer described how he watched the sailor running along the street, grabbing any girl in sight.

“I was running ahead of him with my Leica looking back over my shoulder but none of the pictures that were possible pleased me,” he wrote in the book Eisenstadt on Eisenstadt. “Then suddenly, in a flash, I saw something white being grabbed. I turned around and clicked the moment the sailor kissed the nurse.

If she had been dressed in a dark dress, I would never have taken the picture.”

Friedman, who at the time was working as a dental assistant, said she had not been aware of the existence of the photo until the 1960s.

“It wasn’t much of a kiss,” she later recalled. “It was just somebody celebrating. It wasn’t a romantic event. It was his jubilance that he didn’t have to go back.”

The photographer, in the chaos of the moment, did not get the names of the couple in his photograph. Many different people have claimed to be both the man and the woman kissing, but it is believed that Mendonsa and Friedman were the two in question.

Mendonsa’s new girlfriend, Rita Petry, supposedly saw the kiss happen but said later she did not mind. They married in 1946 after Mendonsa was discharged, and he returned to professional fishing.

Although some have criticized the photo in recent years as showing an assault, Friedman disagreed. She told The Navy Times in 2012 that the day was so momentous that she empathized with Mendonsa’s excitement. “I can’t think of anybody who considered that as an assault,” she said. “It was a happy event.”