When we’re told about black people at the turn of the nineteenth century, stories of prestige and renown are hidden from us by the usual account of slavery and colonialism.

But Georgian Britain did have its black celebrities, and boxer Bill Richmond, the world’s first black sports star, was one of them.

Bill Richmond was born a slave in the United States in 1763 but spent the majority of his life in England.

When he first arrived here it was to Yorkshire, where British soldier Hugh Percy funded his formal education as a cabinet-making apprentice.

Being highly intelligent and intellectual, it would often be commented that Richmond had exceptional wit; though his literacy and gentlemanly mannerisms often meant he was the target of racist abuse from his white counterparts.

It would partly be the combination of his thoughtful demeanor with his successful boxing exploits that would win him celebrity status in England.

Richmond moved to London and launched a boxing career, having his first professional fight in 1804 at the age of 36.

Despite losing the match to veteran boxer George Maddox, he came back to secure a succession of victories and cement his renown as a talented sportsman.

In 1809 Richmond challenged Maddox to a rematch and won; with his winnings, he became the landlord of The Horse and Dolphin Pub in Leicester Square. 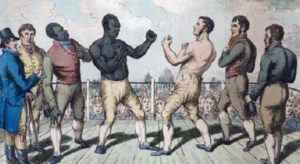 Such was Richmond’s fame that nineteenth-century writers like Sir Arthur Conan Doyle and Thomas Moore have made reference to him in their literary works. The artist Robert Dighton immortalized his face in the print A Striking View of Richmond.

While the general public became captivated by his personality and boxing successes, elites such as Lord Byron were requesting him as a teacher; he also rubbed shoulders with royalty as he acted as an usher at the coronation celebration of King George IV.

As a famed boxer in Georgian England, Bill Richmond shatters the belief that black people didn’t significantly contribute to British society until the twentieth century.

In the same era that the Encyclopaedia Britannica defined black people as ‘an awful example of the corruption of man left to himself’ and the abolition of the slave trade was still a few years away, the fact that he established a highly-respected name for himself speaks to an iconic resilience and determination that should not be forgotten from our history books.