Footprints left by Native American farmers, children and their dog unearthed in Arizona

Just recently, archaeologists Found something absolutely amazing – tracks that appear to have been made by a farming family in Tucson, Arizona. These people walked on earth over 2000 years ago.

There are footprints from farmers, their children, and even their dog. It appears they wandered through fields on this site. The prints were found as plans were being made to build a new highway in the area.

These footprints are frozen pieces in time, telling about what the Native Americans did at that time.

They were imprinted in thick mud and well-preserved when a flash flood covered the area in sediment, forming a hard crust over the prints.

Archeologists are now able to see how these Native Americans were living and growing their crops. They also believe some of the earliest farmers in North America made these prints. 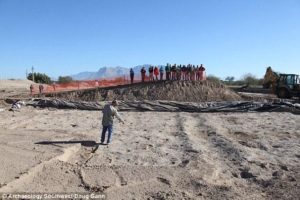 Who the family was is still not clear, but it is believed that they were ancestors of the culture of Hohokam, which later emerged in the region around the Santa Cruz River. They are known as farmers who rely on canals of irrigation to water their crops.

Cotton, tobacco, maize, beans, and squash were generally grown by the Hohokam. They also made pottery in red clay. They are believed to have emerged around 300 AD before they disappeared around 1450 AD.

The Sunset Prints show adults, kids, and pets in the field where irrigation channel networks existed. Planting holes left by crops in the mineralized mud were also preserved. This could also provide clues as to what crops have been planted in the general area.

The tracks show the farmers treading heavily and slowly across the fields as the children ran around them, with their dog following. In another area, one of the parents appeared to have stopped to pick up a child before setting it back down again. Alongside these footprints is a handprint of a young child.

More discoveries and more footprints are still being made by archeologists. S.W.C.A. Environmental Consultants conduct the excavation. They are studying the field that is to be destroyed in order to build a bridge for a nearby highway.

Doug Gann, a preservation archaeologist for Archaeology Southwest, has been using advanced 3D scanning to record the prints before the area is cleared. He said that working with the footprints gives him an intimate feeling of the people who once stood there.

He added that he worked in archeology for 30 years, and these footprints brought him to tears. He said it’s not just footprints, it’s the markers of what used to be there and the people who lived there.

He believed that that particular day had to be quite wet to make so many tracks. So far about 4,300 square feet of the prints have been exposed.

They had uncovered tracks of men, women, children, and dogs while examining the site for Pima County under the National Historic Preservation Act.

Dan Arnit, an archaeological excavator, was the 1st person to spot the tracks. As workers removed dusty soil, they were able to follow the footprints along. They also uncovered irrigation channels, earthworks, and ditches which would have been used to keep the fields watered.

One set of prints appears to walk diagonally across the field and stop to do some work in a ditch before continuing. Another footprint has a dog’s paw print inside, showing that the animal followed its master. The small prints of a child allow archaeologists to see just how it interacted with its parents.

While these prints are not the oldest found – the oldest are over 13,000 years old – they are among some of the most detailed and reveal how farming was done 2,500 years ago. 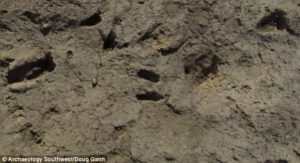 Gann explained that the prints show people moving from channel to channel to build thick mud dams to divert a surplus of rain and river water to their maize plants.

The archeologists have also uncovered the paw prints of cats. In the new bridge designs, they hope to incorporate some of them.

Gann added that the findings are so new that the scientific archaeology community has not had time to provide them with a name yet. He is hoping that there are more footprints in other areas that were once fields. The work is still being continued today.