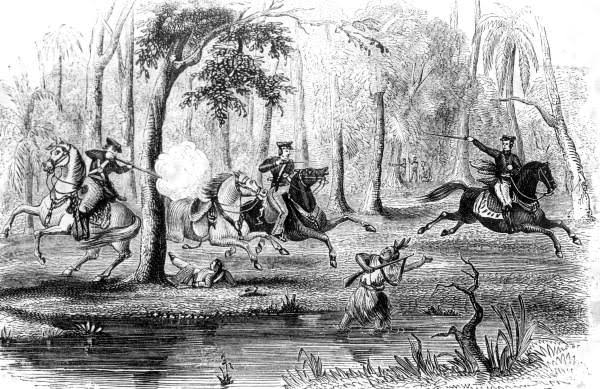 Florida History: The most expensive war the white man ever waged against Native Americans

The United States fought a series of three wars against the Seminole people of Florida, beginning in 1816 and ending in 1858. These wars cost the lives of some 1,500 Americans and cost millions of dollars.

When we started Florida Time, we warned you we’d be busting some long-held notions. Here’s the next one: the Seminoles are not indigenous to Florida.

What were the Seminole Wars?

Although few know the Seminoles for anything other than casinos, alligator wrestling and the college football team that uses them as a mascot, they and the wars they fought played a key role in the history of Florida.

Seminoles came down from Alabama and Georgia in the 1700s, which makes them snowbirds of sorts.

In all, they fought three “wars” in the mid-19th century. Each was ugly, unpopular and inconclusive. For more than a century and a half, the Seminoles have boasted of never having surrendered.

The Third Seminole War, a series of skirmishes from 1855 to 1858, was the last Indian war east of the Mississippi.

But the most infamous was the Second Seminole War, from 1835 to 1842. It killed 1,500 U.S. soldiers and countless Seminoles. It was the longest and most expensive war the white man ever waged against Native Americans — and draws many parallels to Vietnam.

The conflict was less than popular on the home front because soldiers were sent far away to an inhospitable swamp to fight locals familiar with the territory. It was also a war of attrition in which three soldiers died of disease for every one killed in battle.

U.S. forces built more than 400 forts during the Second Seminole War and cleared about 5,000 roads to connect them, including what is now southern Florida’s Military Trail.

The war ended when Col. William Jenkins Worth, who commanded Federal troops, unilaterally declared it over. Lake Worth, near West Palm Beach, already had been named for him. When he went off to Texas, he added Fort Worth.

The Second Seminole War also is notable for the way it started.

“Have a good heart; our difficulties and dangers are over now,” Dade said.

Three minutes later, he was dead, in a Seminole ambush, along with 105 of his 107 soldiers.

Seminoles called the event of Dec. 28, 1835, a great victory in their decades-long battle to keep the white man from killing or exiling them. White America long called it the Dade Massacre.

The war was on. Dade eventually would have a Florida county named for him, a distinction he likely would have declined, all things being equal.