20,000 years ago, humans probably didn’t have much in the way of pockets. But they also wished to make and bring pocket trinkets, including several small graved art works that celebrate the wonders of the natural world, as new research reveals.

Archeologists who excavate an Indonesian cave discovered the very first portable engravings of this kind discovered in Southeast Asia. They also unearthed two stone “plaquettes” with an anoa (dwarf buffalo) that could be a star, a flower or an eye.

The findings, described in a paper published in last month in Nature Human Behavior, further contradict the outdated idea, which says Dyani Lewis for Cosmos, that human capacity for complex creative speech originated solely in Europe.

Discovered through a series of digs carried out on the Indonesian island of Sulawesi in Leang Bulu Bettue between 2017 and 2018, the objects are believed to be between 14,000 and 26,000 years ago and not long before the end of the last ice age.

Discovered strewn amongest a slew of other artifacts, including stone tools, burnt and butchered animal remains, and bits of body ornamentation, they may have served as decorations in a well-loved gathering place.

Both the plaquettes appear to feature real-world phenomena. Etched into one is the head and upper body of a small buffalo native to the region-an important animal that probably served as fodder for hunter-gatherers’ food and tools thousands of years ago.

Anoa also feature prominently in cave art painted onto rock walls as far back as 44,000 years ago, further highlighting the crucial role they played in daily existence, the researchers write in an article for the Conversation.

The other etching is more ambiguous. Tentatively described by the researchers as a sunburst, it shows a vaguely hexagonal figure sprouting rays, limbs, petals and perhaps even eyelashes that were once streaked with red pigment.

Whatever it was modeled on, the engraving represents “something real,”according to the researchers,“so we believe the artist has created an image of something from the natural world.”

Unlike immobile rock paintings, though, the pocket-sized pieces likely gave people a way to maintain cultural connections with both animate and inanimate objects across great distances. For humans, fashioned and tailored objects didn’t just have to be practical tools: They could hold emotional value, too. 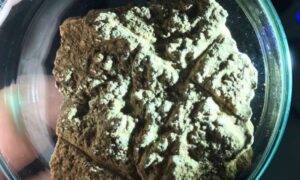 Similarly portable engravings that date to roughly the same time period—about 20,000 years ago—have been found in Europe and Western Asia.

The new Indonesian find, as the only representative from its region, suggests that “there were similar cognitive and artistic responses to the natural world made by modern humans in the Pleistocene in different parts of the world,” Susan O’Connor, a rock art specialist from the Australian National University who wasn’t involved in the study, tells Genelle Weule of Australia’s ABC News.

Last December, a separate team of researchers uncovered another instance of ancient Sulawesi art: a 44,000-year-old rock mural that depicts what may be the world’s oldest storytelling scene, predating comparable works in Europe.

As Langley’s team writes in the Conversation, these discoveries are, for now, firsts—but they certainly won’t be lasts. Each additional find represents another knock against Euro-centric theories of the evolution of human intelligence.

“With more discoveries going on over this side of the world, we’re finding that’s definitely not the case,” Langley tells Cosmos. “People were doing [art] over here at the same time or earlier. We just hadn’t been looking.”