In a rocky outcrop in Wales from where the bluestones found at Stonehenge originated, archaeologists have found the exact holes, revealing that they were quarried 500 years before they were formed into the famous stone circle that is still standing in Wiltshire, England today. 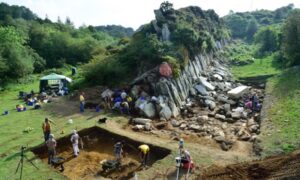 The dramatic discovery indicates that in Wales, the ancient monument was first erected and then removed, transported, and reassembled in Salisbury Plain about 140 miles away.

The Guardian reports that the discovery was made during a project to examine quarries in the Preseli Hills in Pembrokeshire, Wales, run by University College London (UCL), in collaboration with the universities of Manchester, Bournemouth and Southampton, among others.

It has long been known that the bluestones – a term used in a loose sense to cover all of the ‘foreign’ stones which are not native to Salisbury Plain – originated in southwest Wales.

Their name actually refers to the spotted dolerite, an igneous rock that looks blue when broken and is spotted with small pellets of feldspar and other minerals that got into the molten matrix when the rocks were forming geological ages ago.

Nearly a century ago, in 1923, the eminent petrographer, Herbert Thomas, was able to identify their source as the Preseli hills.

Now archaeologists have been able to identify a series of holes in rocky outcrops that exactly match the size, shape, and consistency of Stonehenge’s bluestones at Carn Goedog and Craig Rhos-y-felin, to the north of Preseli hills.

The holes have been radiocarbon dated – from nutshells and charcoal from the quarry workers’ campfires – to 3,400 BC at Craig Rhos-y-felin and 3,200 BC at Carn Goedeg.

However, the bluestones were not assembled at Stonehenge until 2,900 BC, which raises the question as to why they were quarried centuries before their use in the famous stone monument in Wiltshire, England.

“It could have taken those Neolithic stone-draggers nearly 500 years to get them to Stonehenge, but that’s pretty improbable in my view,” Prof Mike Parker Pearson, director of the project, told The Guardian.

“It’s more likely that the stones were first used in a local monument, somewhere near the quarries, that was then dismantled and dragged off to Wiltshire.”

One hypothesis is that the current dating of Stonehenge is wrong and it is actually much older. However, Professor Pearson believes “it’s more likely that they were building their own monument [in Wales], that somewhere near the quarries there is the first Stonehenge and that what we’re seeing at Stonehenge is a second-hand monument.” [via The Guardian]

Much archaeological debate has been expended on how the bluestones arrived at Stonehenge – whether by human effort, floating the stones (each weighing several tonnes apiece) across water and dragging them across land, or whether they were deposited on Salisbury Plain naturally by glacial action.

Although a small number of archaeologists still belief in the latter theory, most now believe the bluestones were brought by human transportation because glacial movement in the region does not support the transport of glacial erratics in the required manner.

The latest discovery certainly suggests that the stones were intentionally transported to England.

According to The Guardian, the research team will now be carrying out geophysical surveys, trial excavations and aerial photographic analyses in the area between the two quarries in Wales to identify the area where a Stonehenge-like stone circle was originally assembled.

The researchers have hinted at the fact that they may already have found a promising location and that a big discovery may follow in 2016.