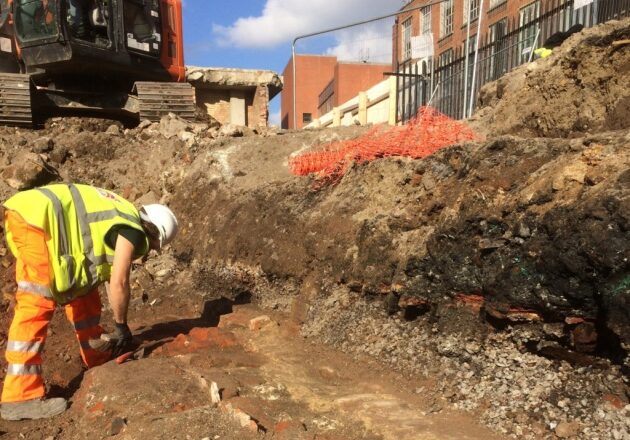 The objects found in the excavation of a Shakespearean playhouse in Whitechapel include a money pot and a bone needle ring.

In 1598, Boar’s head was converted from an inn to a playhouse but there are references to open-air performances on the site as early as 1557.

And the excavation, led by a group of the London Archaeology Museum (MOLA), aims to uncover artifacts relating to the playhouse, as well as its performers and audience.

Archaeologist Heather Knight said: “Theatre emerges and booms in 16th century London and made its lasting mark on theatre across the world.

“The Boar’s Head Playhouse is often overlooked when considering Elizabethan playhouses, yet the site has an extraordinarily rich legacy, cited in one of the first known references to a theatre in London, at which stage plays were performed in open-air spaces and city inns.

“It’s going to be really interesting to compare the archaeological remains and artifacts from this site with other Shakespearean-period playhouses and we look forward to sharing these findings with the public.”

The excavation is being funded by student accommodation provider Unite Students, with the company sent to build new residences on the site once the dig has been completed.

Once the remains of the theatre have been studied, they will be preserved within the development – set to house around 915 students when it opens in 2021.

Richard Smith, chief executive of Unite Students, said: “We’ve been providing homes for students for nearly 30 years and it’s the first time we’ve revealed something of such archaeological significance on such a grand scale.

“We are very excited to be working with MOLA and Historic England to preserve the Elizabethan theatre’s remains.”

Duncan Wilson, the chief executive of Historic England, added: “The archaeological remains of the Boar’s Head are an important survivor from this rich period in the history of theatre.

“Historic England has worked closely with the developers and archaeologists to secure the investigation and preservation of this important historic Elizabethan site.”