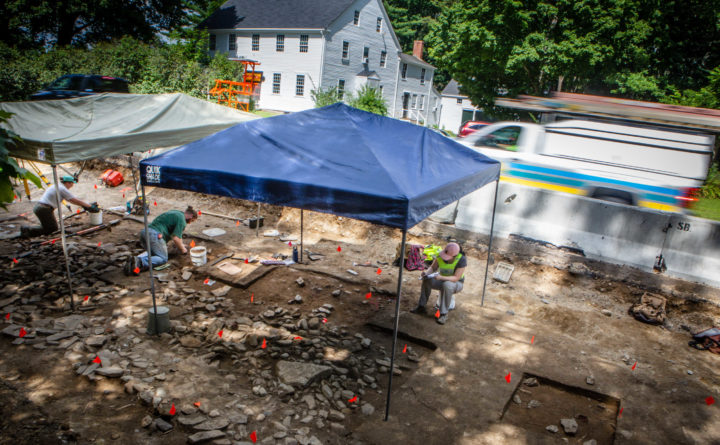 This summer a team of Maine archeologists is racing to uncover the secrets of a colonial-era frontier fort before impending roadwork obliterates it for good. One of Maine’s most renowned battles between white settlers and Native Americans raged just outside its gates.

For many years historians suspected that the fort was laying under River Road, but digging for evidence has been impossible since it was paved in the 1920s.

In a few weeks, the road will be flattened and widened by five feet. Everything that remains of the fort will be carted away dump trucks. The road’s construction project will now offer the archaeologists a chance to take a look.

In the meantime, work crews have peeled back the asphalt over one lane of the road at the hilltop site, and a team of archaeologists with the Maine Historic Preservation Commission is digging for clues. They are halfway through their four-week time window. When it’s up, they’ll have another four weeks to dig on the other side of the road.

So far, the news is good: They’ve found it. “It could have been destroyed in earlier road construction,” archaeologist John Mosher said. “As it turns out, it’s all here.”

In 1734, 60 people from Marblehead, Massachusetts, were granted land in what’s now Windham. They called their settlement home New Marblehead. The next year, farm lots were laid out and by 1737 residents were building a meetinghouse. The land was not unoccupied, however. Native Americans had lived there and fished in the nearby Presumpscot River for thousands of years.

Tensions were high between the two populations from the start. A war between England and France was brewing again, and Maine’s Native Americans had always sided with the French. New Marblehead was on the frontier and was vulnerable to attack. Settlers decided they needed a fort for protection.

“On Nov. 12, 1743, the [Massachusetts] House of Representatives voted one-hundred pounds to New Marblehead, along with grants to other settlements, to build a fort,” wrote Frederick Howard Dole in his 1935 book, “Sketches of the history of Windham, Maine.”

Province Fort, built at the highest point in their settlement, was one in a string of wooden defensive structures on the Maine frontier in places such as Buxton, Richmond, and Gorham. It was finished by the time open hostilities broke out in 1745.

“They had houses all up and down the river and were working fields but by 1745 [settlers] were in fear for their lives from Abenaki attack,” Mosher said. “Whenever there was an attack, everyone zipped into the fort.” Despite the dangers, the settlement continued to grow. By 1750 the fort had to be enlarged to accommodate all the area families. Attacks continued for almost another decade, until the fall of Quebec in 1759.

The most famous battle at the site came in May 1756. A group of men left the safety of the fort to plant corn in Ezra Brown’s field, a mile off to the east. “There being no wheeled vehicles in the settlement, they were obliged to yoke oxen to a sled on which they had placed their seed and rude farming tools,” Dole writes.

When they reached the field, Brown laid aside his musket while opening the gate to the field. That’s when a band of hidden Native Americans opened fire. “Brown was killed with a bullet through the heart,” Dole writes. Another man, Ephraim Winship, was shot through the arm and eye. He was then scalped. The remaining men ran back to the fort.

A fierce battle ensued outside the walls. It ended when settler Stephen Manchester fatally shot the well-known Native American leader, Polin. Polin had long opposed the settlers in New Marblehead. In the summer of 1739, he walked with other Native Americans to Boston, where he spoke with the governor of Massachusetts.

“They stated their grievances,” writes Nathan Goold in his book “Stephen Manchester, Slayer of the Indian Chief Polin,” published in 1897. “They wished a fishway kept open in the [dam] at the Presumpscot Lower Falls, and objected to the further settlement of the land on the river, as they wished the river for their trade.”

It’s unclear if the Massachusetts government made Polin any promises. If so, they were not kept. More dams were built on the river and the settlements only grew. Manchester was hailed as a hero. “The settlers felt grateful to Manchester for killing [Polin],” Goold writes. “A tradition is that Manchester was offered a township for his reward but declined the offer saying it was, ‘Reward enough to have killed the skunk.’”

After Polin’s death, his body was taken away by retreating members of his band. Legend states he was buried on the banks of the river.

The spot where archaeologists are now digging has long been thought to be the site of Province Fort. The site is near the Parson Smith House, where the town’s first minister lived. Archaeological test pits were first dug there in search of the fort in 1979. “Back then they found 18th-century materials,” Mosher said, as his team worked around him last week. “But nothing that screamed 1740s fort.”

More pits were dug in the ’80s, but it wasn’t until 2015 — when archaeologists knew road construction was coming — that real evidence of the fort was uncovered. That’s when Mosher and his team found wall segments and chimney bases while digging under the shoulders on either side of the road.

“That’s when we knew we were in the right place,” Mosher said. Dole’s book states the fort was 50 feet square, with swivel canons at two corners. It was surrounded by a 12-foot stockade fence made from 12-inch logs. They were spaced far enough apart to shoot through but not wide enough for a man to pass.

Mosher thinks it was probably even bigger to encompass the whole town for the better part of 15 years of hostilities. Based on what they’ve found so far, Mosher suspects the fort was at least 200 feet long, running north to south. He’s hoping what they find in the next few weeks will tell them how long it ran in the other direction.

“It’s got to be at least 100 feet,” Mosher said. The archaeologists also hope to find evidence of other buildings — like a blacksmith — on the inside. It stands to reason, Mosher said, given how long the settlers were spending cooped up there.

What they’ve found so far is a mysterious 10-by-60-foot bed of stones. Mosher suspects it was once topped by a wooden boardwalk. It would have run beside one of the buildings inside the fort and provided a mud-free passageway.

“We keep changing our minds and we won’t have a definitive answer until we dig the other side of the road,” he said. “It could also be defensive.” The rocks may have been to ward off attackers who tried to dig under the defenses. Mosher ran across a similar rock feature while excavating another fort of the same era in Richmond.