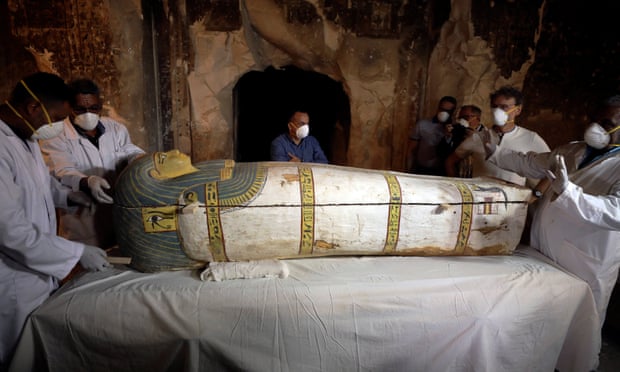 Mummy found inside a sarcophagus in Luxor tombs that also contained statues and figurines.

A well Preserved mummy of a woman inside a previously unopened coffin dating back more than 3,000 years has been unveiled in the southern Egyptian city of Luxor.

The sarcophagus was one of two found earlier this month by a French-led mission in the Al-Assasif necropolis on the western bank of the Nile.

The first one had been opened earlier and analyzed by officials, but Saturday’s unveiling was the first time specialists had opened a previously unopened sarcophagus before international media.

One of the two contained the “well-preserved” mummified remains of a lady named Thuya, the antiquities ministry said in a statement, but ministry spokeswoman Nevine Aref later said work was continuing to definitively recognize the name of the mummy.

“One sarcophagus was rishi style, which dates back to the Seventeenth dynasty, while the other sarcophagus was from the Eighteenth Dynasty,” the minister of antiquities, Khaled al-Anani, said.

“The 2 tombs were present with their mummies inside.”

The Eighteenth dynasty dates back to the 13th century BC, a period noted for some of the most well-known pharaohs, including Tutankhamun and Ramses II.

Among the finds in the tomb were sarcophagi, statues and some 1,000 funerary figurines called ushabtis, made of wood, faience, and clay.

The tomb belonged to Thaw-Irkhet-If, the mummification supervisor at the Temple of Mut in Karnak, as per the ministry.

The tomb, which additionally contains mummies, skeletons and skulls, dates back to the middle kingdom – almost 4,000 years Prior – but was reused during the late period.

Rubble 300m deep was removed over 5 months to uncover the tomb, which contained coloured ceiling with paintings depicting the owner and his family.

Egypt has revealed over a dozen ancient discoveries since the beginning of this Calender year.

The country hopes these Founds will brighten its image abroad and revive interest among travelers who once flocked to its famed pharaonic temples and pyramids, but who have shunned the country since its 2011 political uprising.