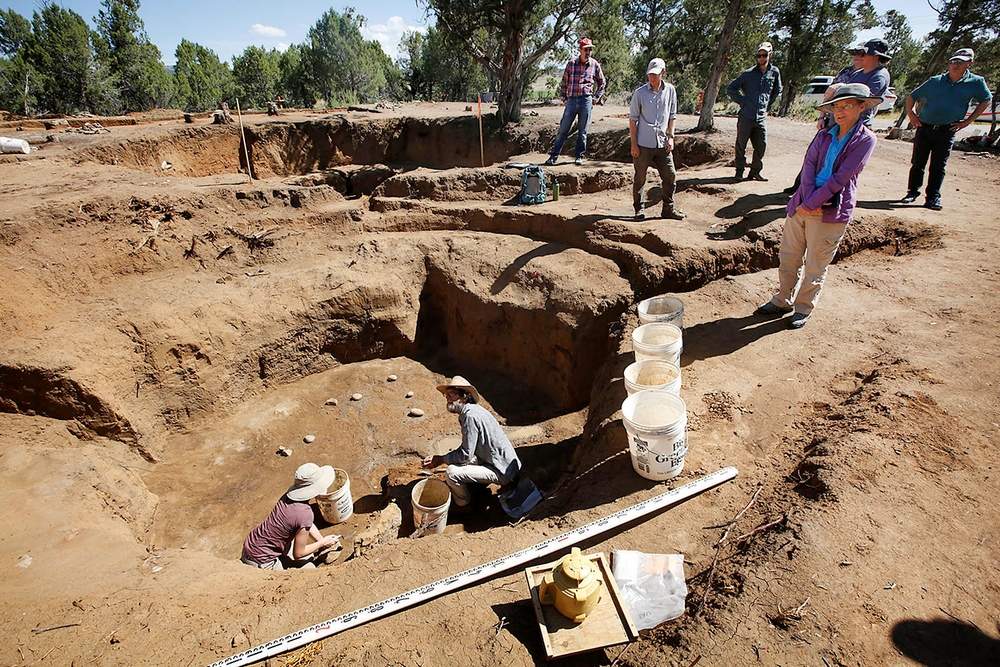 Archaeological ruins have been unearthed in Colorado in the path of a proposed highway construction project. The Durango Herald reported Friday that well-preserved Native American ruins were discovered while surveying the Florida Mesa for realignment of the U.S. Highway 550 interchange.

Richard Wilshusen has surveyed hundreds of Native American ruins in his 40 years as an archaeologist. The size and scope of the site impressed him.

“What is blowing people away is they didn’t think the site would be nearly as big as it is,” he said. “It’s a wonderful surprise.”

There’s only a short window, however, for archaeologists to have a field day with the new find.

The ruins were discovered as part of the surveying for the realignment of the U.S. Highway 550 interchange, to finally connect the “Bridge to Nowhere” to somewhere. Road construction will destroy the site, but not before researchers try to unlock some of its mysteries.

To prepare for expected population growth in Durango, it was decided years ago that U.S. 550’s route south of Durango to the top of Florida Mesa, known as Farmington Hill, was too steep and dangerous for increased traffic and would have to be improved.

The proposed $100 million solutions were to create a new interchange, a little farther east of Durango, that would feature a system of roundabouts and bridges that would travel to a flatter grade on Florida Mesa, requiring at least 2 miles of a new road across mostly private land.

As part of federal and state laws, CDOT, the agency leading the project, was required to survey the proposed footprint of the new road, which lies mostly as farmlands, for any historic or archaeological sites before construction can begin.

Surveyors had a hunch the area was rich with Native American artifacts for years, but several well-noted delays with the interchange project staved off the portion of the research that requires a full-scale archaeological dig. It wasn’t until last fall and this spring that the extent of the site was realized.

“That’s the mystery of archaeology: We don’t know what’s under the surface until we put a shovel there,” Jepson said. “But once we started to excavate, we realized we had some rather remarkable structures there.”

Charlie Reed is with Alpine Archaeological Consultants, the company contracted by CDOT to lead the excavation of the sites. He said the first step in tracking down signs from the past is a simple walk, looking for telltale signs such as broken pottery, scattered cobbles or depressions in the ground.

Since beginning last fall, digs have turned up a vast expanse of ruins left by Native Americans who inhabited Durango around the year 800. Slowly, they unearthed vast ceremonial sites, large pit houses and living quarters. “One of the pit houses are one of the larger structures we’ve seen in the region,” Reed said. “These projects come along rarely.”

At one site, researchers discovered shells from the Baja region, which pointed to a wide tribal trading network. At another, fish bones found in a pit house pointed to the Animas River as a food source.

‘Our eyes have just opened’

The ruins found around Durango, which tends to be older than Mesa Verde in the Pueblo I period from about 750 to 900, however, have been subject to less study, said Wilshusen, who is an affiliate faculty with Colorado State University in Fort Collins.

While structures and hints of lifestyles hold similarities, there are distinct differences. Wilshusen said the site on Florida Mesa, for instance, shows the first attempts of Native Americans settling into villages.

Honoring those who came before us

As more people move to the Southwest, it’s inevitable the conflict between preservation and development will arise. That’s why federal and state laws aimed at protecting these sites are so important, said Bernadette Cuthair, director of planning and development for the Ute Mountain Ute tribe, one of four tribes being consulted during the U.S. 550 project. But it’s not always easy when a project requires the destruction of ruin or site.

“Honoring those people that have come before us is very important to the Native American community,” Cuthair said. “It is something we hold to our heart, as far as respecting and being mindful of their ways in the past.” Still, archaeologists and tribes may have disagreements.

“From an archaeological standpoint, yes, it’s important and possibly a learning tool,” Cuthair said. “But for us, it’s a connection to our past. That’s really important to us. And we have to take care of it in the right way.”

The Southern Ute tribe declined to comment for this story. Calls to the Hopi and Pueblo of Laguna tribes were not returned. Ernest House Jr., a Ute Mountain Ute member who served as director for the Colorado Commission for Indian Affairs for 11 years, said a turning point came in 2007 when state protocol gave tribes greater control and input when historical sites are discovered. This protocol is particularly important, House said, when human remains are found.

“They’re our ancestors, and there was care taken to make sure they had a proper burial,” he said. “So when they are uncovered, that burial is not complete and that individual’s spirit is left between various worlds. The tribes want to make sure they are back in the ground in a timely manner.”