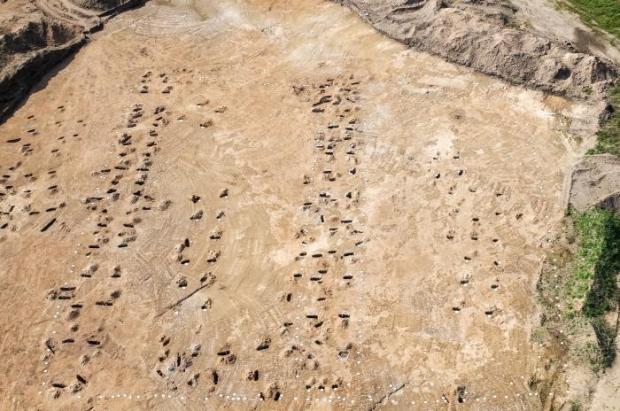 Archaeologists in Denmark have unearthed the remains of a 1,500-year-old farming village near the famed Viking site of Jelling in central Jutland.

The excavated village contains traces of up to 400 farm buildings, including several long houses that would have each formed the center of a family farm.

Based on the distinctive shapes of the buildings, researchers have dated the remains to between A.D. 300 to 600 — a time known as the early medieval period in Europe, during the Germanic Iron Age in Denmark.

“The carbon-14 dates will come later,” said Katrine Balsgaard Juul, an archaeologist, and curator with the Vejle Museums in southern Denmark, who led excavations at the site from October 2016 until this October.

“We have taken soil samples from all the main houses, but they are still being processed.” (Dating sediments using the carbon-14 isotope can offer more precise ages, the researchers noted.)

“But in Denmark, we have a very long tradition of excavating early medieval settlements, so we are quite confident with the dates, even with out the carbon 14 dating,” she said.

The site at Jelling is the biggest early medieval settlement unearthed in Denmark, although several smaller sites are well known to archaeologists, such as those at Vorbasse in southern Denmark and at Nørre Snede, also in central Jutland, reported Science Nordic.

The significance is in the size of the site — it makes it possible for us to test the knowledge that we already have, Balsgaard Juul told Live Science.

“We have an idea of how the society developed at this time and how these Village developed, but now it is actually possible for us to test whether we can perceive these features in a large excavation such as this,” she said.

Balsgaard Juul said the main features of the site were the thousands of postholes left by buildings constructed at different times during the 300 year period.

“We basically found 20,000 post holes, and that is quite a lot, especially for my colleague, who measured it all with a GPS,” she said.

The position of many post holes showed that numerous buildings had been constructed on the same plots of land used by earlier buildings.

“It seems likely that there was some sort of core within this early medieval village, where the houses were rebuilt at least 5 times in a row,” she said.

“We usually say that these types of houses have a duration of at least 30 years, so it means that some areas of this village were possessed for a very long time.”

The ancient village included between eight and Ten longhouses at different times, each around 110 feet (33 meters) long and 18 feet (5.5 m) wide.

Each longhouse would have been the main building of a family farm, and home to between eight and 15 people, she said.

According to the traditions of the time, the villagers would have shared the longhouses with their animals: “We have the living area in one side of the house, and then in the middle of the house there is an entrance area, and on the other side there was a stable for animals and for whatever else you need for living in the [Germanic] Iron Age.”

The villagers would have cultivated crops in fields around their farmsteads, while the animals would have grazed on pastureland and in open forests nearby, Balsgaard Juul said.

In addition to the longhouses, hundreds of smaller outbuildings occupy the site. The smallest, around six by six feet (2 by 2 m), may have been granaries or storehouses, Balsgaard Juul said.

Others may have been working areas for making pottery or woolen texture, she said.

They also found an area where iron smelting ovens appeared to have been used at the time.

The iron would have come from the ore-rich soil found in many bogs in Denmark, and one of the smaller structures is thought to have been a smithy where the metal was worked.

The newly Found village is about 0.6 miles (1 kilometer) from the UNESCO World Heritage site at Jelling, which features a historic church and two burial mounds from the Viking Age, along with the runic Jelling Stones placed by King Harald Bluetooth in the Tenth century to mark the introduction of Christianity to his kingdom.

But Balsgaard Juul clarified that the early medieval site was not directly connected with the later Viking Age developments.

Now that the excavations have been finished, the site will be developed into a modern village of about 40 houses, she said, but the memory of one of the ancient longhouses will be safeguarded.

“We have made plans with the city hall [to] mark out one of the [early medieval] houses on the site,” Balsgaard Juul said.

“We will make it visible above the ground where the post holes were, and then people can come and see where the actual village was situated in the early medieval period.”