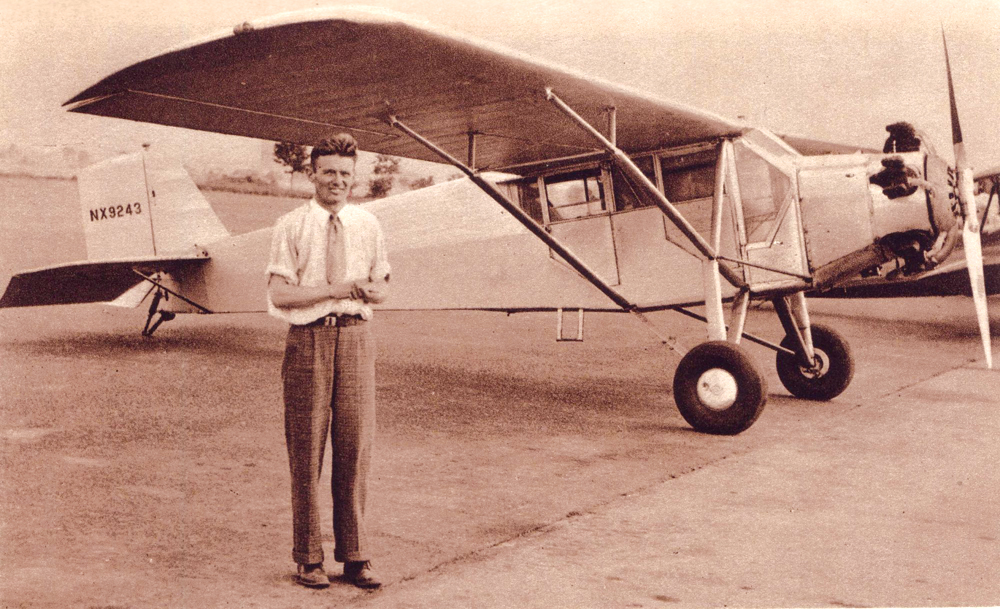 Pilot Departed from New York for a Non-Stop Flight to L.A – Landed in Ireland

Douglas Corrigan became a legendary aviator, not because of his accomplishments as a pilot but rather because of a supposed navigational error. In 1938, Corrigan “mistakenly” flew from New York to Ireland–when he was supposed to be flying from New York to California–because he seemingly misread his compass.

For Americans, who were caught in the midst of the Great Depression, Corrigan’s antic provided a great deal of humor and uplift and he became a national folk hero. To this day, Corrigan’s nickname, “‘Wrong Way’ Corrigan,” remains a stock colloquial phrase in popular culture.

People use it to describe anyone who blunders and goes the wrong way, particularly in sporting events. Nevertheless, as much fun as Corrigan’s incident provides, many people do not understand all the complexities of his story, nor do they appreciate the fact that he was a sound and accomplished pilot.

In 1938, Douglas Corrigan landed his plane at the Baldonnel Aerodrome near Dublin, Ireland. When approached by ground crews, Corrigan quickly stated, “Just in from New York. Where am I? I intended to fly to California.”

Born in 1907, Corrigan’s family moved around a lot but eventually settled in Southern California. Corrigan was a high school dropout that worked construction by the time he was 18 years old.

However, he paid $2.50 to take a ride in a Curtiss “Jenny” bi-plane one day and instantly fell in love with the experience. He soon began taking weekly lessons at the airfield operated by T.C. Ryan, the founder of Ryan Aeronautical.

Corrigan was soon offered a job by Ryan at their San Diego aircraft factory and began working on building the innovative plane that would cross the Atlantic – The Spirit of St. Louis.

It was Corrigan and his colleague, Dan Burnett that came up with the wing design which was much wider, but created more lift on the famous plane. Corrigan was present when Charles Lindbergh took off from San Diego to New York to prepare for his historic flight to France in 1927.

Following the success of Lindbergh and others in the aviation arena, Corrigan made up his mind to complete his own transatlantic flight. Because of his Irish family background, he decided on Ireland as a destination for his adventure.

When Ryan Aeronautical moved from San Diego a year later, Corrigan stayed behind and worked as a mechanic for many years while getting flight time in the company planes. He developed into a much better pilot and saved money.

He eventually bought his own plane – a 1929 Curtiss Robin monoplane in 1933. Corrigan immediately began to modify the aircraft to accommodate a trans-Atlantic flight by adding fuel tanks, upgrading the engine, and to meet the long list of regulations now required on planes. Corrigan named his heavily modified plane Sunshine and began applying for permission in 1935 for his flight to Ireland. However, his applications were repeatedly denied for intercontinental flights.

Despite his continued efforts, Corrigan couldn’t get the needed approval because Sunshine was considered too unstable. Additionally, Corrigan’s plane had several engine maintenance issues and was even grounded for six months by Californian authorities at the behest of the Bureau of Air Commerce.

In 1937, Amelia Earhart’s plane disappeared during her attempted trip around the world and many feared additional regulations on flights would follow. Having prepared his plane as best he could, Corrigan flew from California to New York.

During his flight to New York, Sunshine developed a fuel leak and the gasoline fumes inside the cockpit became almost unbearable. Corrigan landed with reportedly only four gallons of gasoline remaining. Corrigan chose to find a temporary solution to the fuel leak from one of his several tanks instead of replacing it altogether, as this would take a significant amount of time.

He logged a flight plan to California with the Floyd Bennett Field in Brooklyn for July 17th and was instructed by the airfield manager to use any runway he wanted as long as it was headed east.

At 5:15 in the morning on July 17th, loaded to hilt with roughly 320 gallons of gasoline, Corrigan took off from Brooklyn. He had a couple chocolate bars, a couple dozen fig bars, and some water for the journey. He had a compass, a map of the United States and a few tools. 28 hours later, Corrigan spotted green hills and began his descent in Ireland and into history. Authorities didn’t know what to do with him since he didn’t have a passport and officials were summoned from the U.S. embassy.

When asked how he came to be in Ireland, Corrigan claimed he must have misread his compass. When pressed on the issue, Corrigan stated, “That’s my story, but I’m sure embarrassed about the navigational error.” He was eventually issued a 14-day suspension of his pilot’s license.

While abroad Corrigan was celebrated and invited to meet several individuals, including meetings with the Irish Prime Minister and the U.S. Ambassador to England, Joseph Kennedy. The Prime Minister thanked Corrigan for “putting Ireland on the map”.

Corrigan and Sunshine returned to the U.S. by boat and by the time of their arrival, his license suspension was already over. Over 1 million people showed up for a ticker tape parade in his honor in New York City.

Utilizing his current notoriety, Corrigan marketed several products including watches that ran backward and wrote an autobiography. In 1939, he starred as himself in the film The Flying Irishman, receiving $75,000 for the role.

Corrigan went on to serve as a training pilot during World War II and participated in many public relations events during and after the war. He settled with his family in Orange County, California where he lived until his death in 1995.