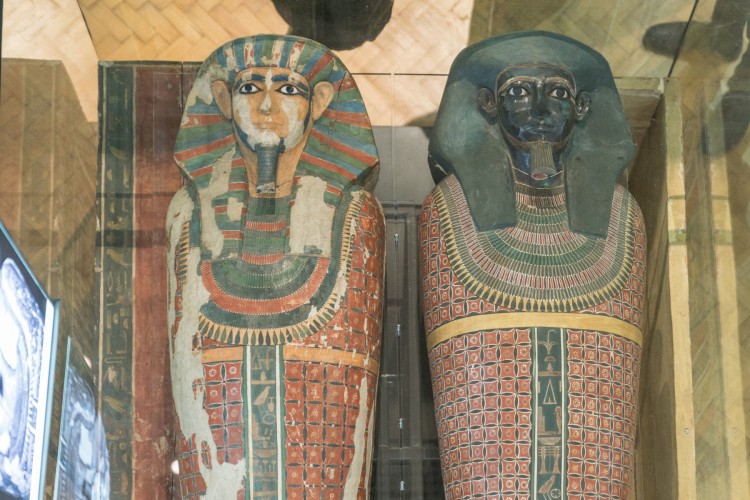 Two Egyptian mummies that rested next to each other for nearly 4000 years are not full brothers, but rather half brothers, finds a new study that used advanced DNA sequencing.

The finding settles a 111 year old mystery that began when excavators exhumed the two mummies in Deir Rifeh, a village 250 miles (400 kilometers) south of Cairo, in 1907. Both mummies — thought to be of noble lineage, based on their luxurious grave good’s and the elite placement of their tomb — had the female name “Khnum-Aa” written on their coffins.

Khnum Aa was referred to as the mother of both men, but studies in subsequent years could not confirm it. Now, by analyzing DNA extracted from the mummies teeth, researchers have verified that these 2 ancient Egyptians had the same mother but different fathers.

“This is an extremely rare, perhaps unique, case where we have been able to test an ancient claim of a maternal relationship made in hieroglyphic texts, alongside the bodies of the individual’s concerned,” study co researcher Campbell Price, a curator of Egypt and Sudan at the University of Manchesters Manchester Museum in England.

Although Nakht Ankh was older by at least 20 years, Khnum-Nakht died first, when he was roughly 40 years old, about 6 months before his brother, according to dates written on their bandages.

Further analyses revealed that the fathers of the men were not named in the inscriptions but rather were referred to as a local ruler. With little else to go on, researcher’s tried a variety of techniques to determine whether the mummies were, in fact, brothers.

For instance, Margaret Murray and her colleagues, who studied the mummies when they were brought to the University of Manchester in 1908, concluded that the 2 were not related after studying the anatomy of the mummies‘ skulls and bodies.

In the 1970’s, an examination of the mummies skin pigmentation led researchers to the same conclusion.

“Previous analyses have been inconclusive or contradictory,” Price said. “Only now has technology developed far enough to allow this type of study.”

To get to the bottom of the mystery, researcher’s extracted DNA from two molars from each mummy. However, the DNA quality in Khnum Nakht was so poor, the researcher’s had to extract a third molar from him. (Khnum-Nakht likely died unexpectedly, as his mummy was not eviscerated — that is, the organs had not been removed — and the mummy was in worse condition than Nakht Ankh, the researchers stated.)

“The 2 mummies had identical mitochondrial profiles, [so] we can be sure they were related maternally,” the study’s lead researcher, Konstantina Drosou, a research associate at the Manchester Institute of Biotechnology, in the United Kingdom.

Even so, the Y chromosome results indicated that the two men likely had different fathers.