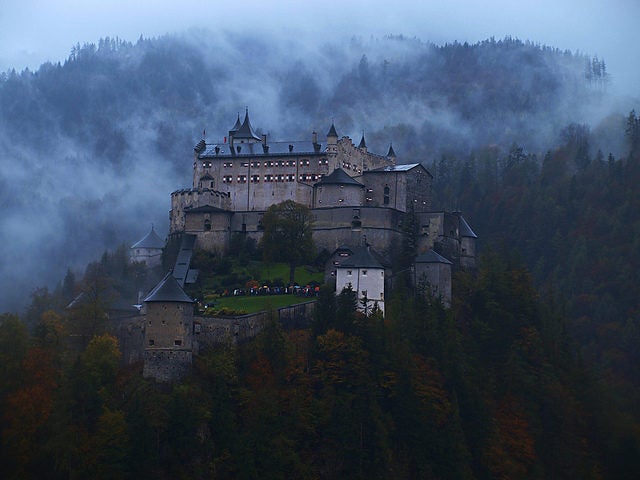 Hohenwerfen Castle, also known as the “Castle of Experience,” is an amazing castle that stands high above Werfen’s Austrian town in the Salzach Valley and has stood the test of time for more than 900 years.

The land is located in the center of a large valley. From the south, there are two massive sets of mountains which create a natural barrier for any traveler or a would-be conqueror.

This pass, that only opened where the Salzach river winds its way northwards, is called “Pass Lueg” and is the only route to cross the mountains.

Therefore, it was a major strategic stronghold in Salzburg for many centuries.

The fortification is a “sister” of Hohensalzburg castle both dated from the 11th century. Over the centuries, the castle has seen countless attacks, seiges, and seen many rulers and lords walk its halls.

It  was extended in the 12th century and again in the 16th century during the “Bauernkriege”, when looting and rioting farmers and miners from the South of Salzburg moved toward the city, laying fire and severely damaging the castle in 1525 and 1526.

After the unsuccessful siege of the Hohensalzburg Fortress, Prince Archbishop Matthaus Lang ordered the castle be rebuilt. The farmers were forced to surrender and as a punishment, they were forced to work on the reconstruction.

Prince Archbishop Johann Kuen-Belasy imported state-of-art know-how from Italy to build fortifications and bastions that should stand firearms and cannons and in 1563 he ordered a massive remodelling of Hohenwerfen.

As time passed, the castle was also used as a state prison and therefore had a somewhat sinister reputation. Many prisoners and nobleman spent their days there under inhumane conditions.

The ruler Archbishop Adalbert III was arrested by his own ministers in 1198, Count Albert of Friesach in 1253 and Prince Archbishop Wolf Dietrich Raitenau died here in 1617 after six years of imprisonment.

In 1987, Hohenwerfen castle was opened to the public and now functions as a museum. Among the numerous attractions offered by the fortress are guided tours showing its extensive weapons collection.

And the historical Falconry Centre offering daily flight demonstrations by various birds of prey, including eagles, falcons, hawks, and vultures. The castle remains one of Salzburg’s foremost tourist attractions and one of the prettiest castles in Austria.