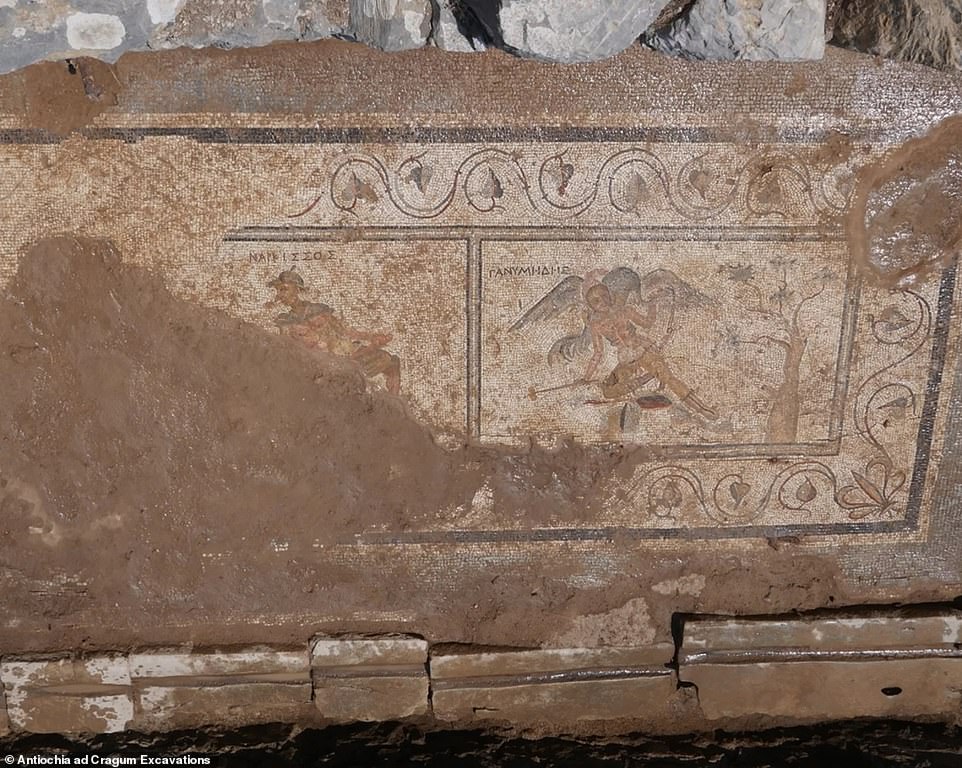 It seems people have been scribbling dirty jokes on bathroom surfaces since the beginning of time.

Archaeologists have found a pair of mosaics in a Roman-era latrine that depict well-known mythological scenes, each with its own raunchy spin.

The 1,800-year-old mosaics, including an picture of Narcissus admiring the reflection of his own penis, are an incredibly rare example of mosaic paving in the ancient latrines.

The mosaics were discovered in the coastal city of Antiochia ad Cragum, in Turkey, according to Live Science.

While the story of Narcissus typically portrays him as beautiful, the man depicted in this particular mosaic has a long, unsightly nose.

Rather then looking at his own face in the reflection of the water, as the myth tells, the latrine Narcissus can be seen looking adoringly at his phallus.

Time has taken its toll on the ancient art piece, and only half of this scene remains today. But, thankfully, the analysts told Live Science, ‘it’s the good half.’

The team found the bizarre artwork towards the end of the excavations this summer, and have since temporarily covered them up for preservation

In the other scene, the myth of Zeus and the kidnapping of the Trojan teen Ganymede has also been twisted, instead showing Zeus – in the form of a heron – cleaning Ganymede’s penis with a sponge.

‘We were stunned at what we were looking at,’ Michael Hoff, an archaeologist at the University of Nebraska-Lincoln, told LiveScience.

‘You have to understand the myths to make it really come alive, yet bathroom humor is kind of universal as it turns out.’

The team found the bizarre artwork towards the end of the excavations this summer, and have since temporarily covered them up for preservation, according to Live Science.

Researchers say there ae only a few mosaic-paved latrines known to exist from the time.

The bathroom humor is just one of many remarkable Roman-era discoveries made at Antiochia ad Cragum.

Unearthings at the site, which was abandoned by the 11th century, have uncovered ancient baths, coin stashes, and even a mysterious skeleton.

The latrine was likely a public space designed to be used by men, as per Live Science, and had clean water channels and marble or wooden seats.

WHY DID THE ROMANS BUILD FOUNTAINS AND OTHER WATER FEATURES?

From the majesty of their aqueducts and fountains to the socialising and relaxation of the public baths, the Roman obsession with water has long been recorded.

For the ancient Romans, water was a gift from the gods and a fundamental component of life, health and hygiene, with every water source protected by its own god or nymph.

Such superstitions are key components in numerous Roman myths, one being that of the water nymph Egeria – lover and wife of Numa Pompilius, one of the seven Kings of Rome.

The Roman capital is famous for its multitude of fountains, including those in front of the Spanish Steps, in Piazza Navona.

Ancient Romans viewed water not only as a necessity of life, but also as a thing of beauty.

Private gardens found in remnants of the Roman Empire are likewise filled with water features.

These range from still pools of water to simple bubbling basins and elaborate tiered creations.