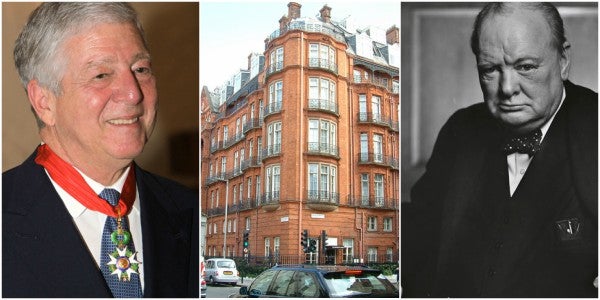 On 17 July 1945, the United Kingdom became a little smaller, and Yugoslavia a little bigger.

On the orders of Winston Churchill, suite 212 of Claridge’s Hotel in London became Yugoslav territory, for one day only.

Winston Churchill was said to be kind of impulsive. On one occasion he allegedly even ceded a part of UK so that a Yugoslav heir to the throne could be born on his home turf. As crazy as this story sounds, the story has been widely circulated by the Yugoslav royal family. So, what’s the catch?

Following the Nazi occupation of Yugoslavia in the spring of 1941, seventeen-year-old Peter II Karađorđević left the country. Peter’s cousin, Prince Paul, acted as regent of Yugoslavia when the country signed the Tripartite Pact with the Axis powers.

Peter and parts of opposition and military establishment opposed the act. On the 27th of March, a coup d’état dethroned Prince Paul and his government. Peter was declared of age and pronounced a king.

The Nazi invasion that followed saw young Peter and a newly established government flee the country. After spending some time in Athens, Jerusalem, and Cairo, the royal entourage finally settled in London. Peter completed his education at Cambridge.

Back in his homeland, the Communist partisan movement led the guerilla struggle against the occupation. In 1942, Peter made several attempts at convincing the Allies to stand with his royal government-in-exile, but to no avail. By then, not only Stalin but Churchill and Roosevelt were firm in their decision to stand with Tito’s partisans, who declared that their future government would strip the royal family of their rights. But the teenager wasn’t willing to give up and become the last King of Yugoslavia.

On 20th of March 1944, Peter married his third cousin, Princess Alexandra of Greece and Denmark. Since her mother was firmly against this marriage, it took the approval of King George VI and the Prime Minister, Winston Churchill, to convince her. The young couple took up residence in Claridge’s, a fancy London hotel, Suite 212.

A year later, on 17th of July 1945, Alexandra gave birth to a boy. The story of Alexander II Karađorđević’s birth became something like an urban myth.

It is believed that in order for his child to acquire Yugoslav nationality, Peter asked Churchill to cede the Suite 212 to Yugoslavia for a day.

Feeling bad for his opportunist support for his Communist adversaries, the British Prime Minister allegedly fulfilled Peter’s wish – and Yugoslav heir to the throne, Alexander, saw the light of day in London, Yugoslavia.

There’s only one problem with this version of events. Apart from the royal family’s testimony and the official history of Claridge’s, there is absolutely no evidence whatsoever that this strange event ever took place.

No newspapers articles, no mention in the Churchill Archives, the National Archives, nor in Hansard, a database recording every word spoken in the British parliament.

After all, only the Parliament of Great Britain could actually have made such a decision. Not a Prime Minister, not even the king himself. Nevertheless, the crown prince Alexander claims that the lack of evidence is due to the later raids of his father’s offices.

His family too maintains the romantic version of events. Alas, on 29th of November 1945, Yugoslavia officially became a republic, and its constituent countries never looked back.