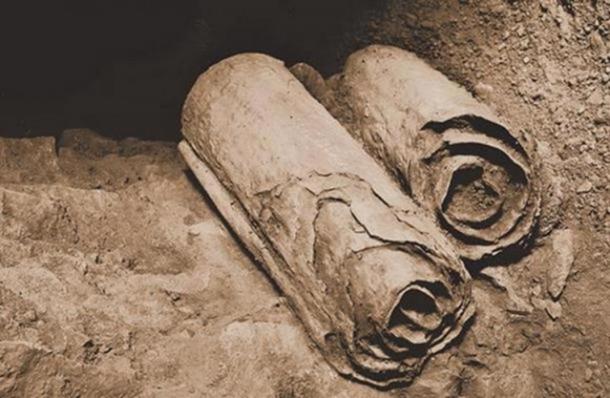 Sophisticated technology has made it possible to scan the old scrolls and reveal previously unreadable letters and words.

The precious Dead Sea scrolls were found near the Qumran Ruins,also known as Khirbet Qumran, in the West Jordan in 1947. Clay pots filled with ancient scrolls were found stored in eleven caves, located 13 miles east of Jerusalem, Israel

The texts are written on carbon-based ink mainly in Hebrew, some in Aramaic (a Semitic language supposedly spoken by Jesus) and Greek. connection between the Dead Sea Scrolls and the enigmatic Essenes soon came to light.

Preliminary analysis showed the texts belonged to the Essenes, member of a religious sect or brotherhood that flourished in Palestine from about the 2nd century BC to the end of the 1st century AD.

A later review of these results has raised additional questions related to the scrolls, considered one of the greatest archaeological events of the twentieth century.

Earlier this year, Israeli and German team of computer scientists and Dead Sea Scrolls scholars started to create a digital copy of the    2,000-year-old Dead Sea Scrolls. There are tens of thousands of Dead Sea scrolls fragments. Each one is photographed 28 times at high resolution using different wavelengths of light.

In some cases, the camera has revealed letters and words that had been erased, or were illegible because that portion of the parchment was burnt. The first results are now reaching the world.

The new interpretations are controversial and although they answer some questions they also raise others. The reinterpretation is being done by members of the historical dictionary department of the Academy of the Hebrew Language.

According to scientists the roof of Noah’s ark was pointed. Dr. Alexey Yuditsky from the department of the Academy of the Hebrew Language says that a word following the words “the ark’s tallness” had previously been illegible.

However, the scan has now revealed it as ne’esefet, meaning “gathered,” which Yuditsky interpreted to mean that the ark’s ribs were gathered together at the top – or in other words, that its roof tapered to a point.

To support his theory, that the ark was pyramid-shaped, Dr. Yuditsky cited various proofs such as for example as the fact that the Septuagint, a Greek translation of the Bible done in the third century B.C.E., used a Greek verb with a similar meaning.

Medieval commentators like Maimonides also concluded that the ark’s roof was pointed, but the new find reveals that this conclusion dates back 2,000 years.

The Dead Sea Scrolls scanning project has already yielded dozens of new interpretations of text, and it is far from over yet. We may expect new intriguing interpretations of ancient history soon. So far, about 80 percent of the fragments have been scanned.