In the world, there are few libraries that can compete with Clementinum or Klementinum’s sheer size in Czech. With the huge collection of inside books, murals, and frescoes, and history on its side, the Clementinum can certainly boast the title of “the most beautiful library in the world.”

The city of Prague in the Czech Republic, founded around 880, is probably one of the most beautiful and admired cultural centers in Europe. Bohemia’s capital is home to Central Europe’s oldest university dating back to 1348. 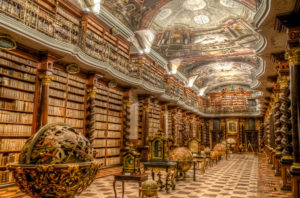 With culture and education this old, it’s only natural that Prague would be full of old libraries, and the most beautiful of them all is the Clementinum Library.

The Clementinum (Klementinum in Czech) which is a historic complex of buildings housing the national library, is not considered only the most beautiful library in Prague but in the world, as well.

The complex was founded when the Jesuits arrived in Bohemia in 1556. The name comes from the chapel dedicated to St. Clement, built in the 11th-century. Later, in the medieval period, a Dominican monastery was founded in the same place, providing a home to the Jesuits.

In 1622, the monastery was promoted to a university which later became the third largest Jesuit university in the world. In 1653, 31 years after its establishment, the Jesuits began with the reconstruction and expansion of the complex, which lasted for more than 170 years, employing some of the most prominent architects of the time.

The Clementinum was expanded to more than 2 hectares, making it one of Europe’s largest building complexes. Today after Prague Castle, it is the second largest complex in Prague.

Although it is still a beautiful example of Baroque architecture, you can find various kinds of architectural styles in the complex, due to its long renovation period. Besides the classrooms, the Jesuits built bedrooms, a print room, church buildings, a pharmacy, and of course, the library.

The Clementinum college and university were merged in 1654, two years after the transfer of the library from Charles University. The complex was run by the Jesuits until the dissolution of their order in 1773.

Two years after the Jesuits left, the oldest weather recording lab in the Czech Republic began operating as a part of the Clementinum University, and it is still functional to this day.

Officially, the library was opened in 1722. The book collection dates back to the time of the Jesuits, and it still has books with white spines and red marks left by them.

Currently, the library is home to more than 20,000 books, most of which are foreign theological literature, with writings dating from the 17th century up until today. Some of those rare books were given to Google for scanning and will soon be available on Google Books.

The interior of the library is of a baroque style, and the magnificent frescoes on the ceiling are made by Jan Hiebl. The frescoes depict Jesuit saints, patrons of the university and motifs of education.

The interiors have been untouched since the 18th century, with the portrait of Joseph II mounted at the head of the library hall, the Emperor who transferred the books from the abolished monastic libraries to the Clementinum Library. The library has a remarkable collection of terrestrial globes and astronomical clocks.

In 1777, Empress Maria Theresa of Austria declared the university and library as open to the public. In 1781, the director of the library Karel Rafael Ungar established a collection of Czech literature, which he called Biblioteca Nationals. This has triggered the idea of creating a national library.

His collection still stands in the same place, at the head of the library hall. One year later, in 1782, it was transformed into a legal deposit library. In 1990, the Clementinum became known as the National Library. Besides the magnificent examples of Czech literature collected by director Karel Rafael Ungar, the library houses pieces written by Tycho, Brahe, and Comenius.

Today, the library is still functional. For several years there was a debate about expanding the space for future library collections as it was expected that the library would fill its capacity by 2010. So, in January 2006, the Prague authorities made a decision to sell one of the city-owned property to the National Library.

In the same year, an international architectural competition was started to get a design for the new National Library building. The architect Jan Kaplicky won the contest, and the final project is in the process of being realized.